Demo play is not available in your region. Please visit one of the casinos listed below for free play.
LeoVegas

Dragon's Luck Deluxe is the third installation in a series of slots from Red Tiger that gave us Dragon's Luck, a Megaways version, and now a deluxe version. The deluxe is closely related to the first one, being incapable of the type of reel gymnastics Megaways brings. In any case, Red Tiger has created an atmospheric slot, offering plenty of exoticism for players keen on some Asian flavoured gaming.

Graphically, a subtle upgrade to Dragon's Luck Deluxe makes it the most pleasing one visually so far. It's not a huge difference, but there is something about the hazy mountain background, rich pagoda frame for the 5 reel, 20-payline grid, and the dragons wrapped around the columns that make Dragon's Luck Deluxe easy on the eyes. It brings to mind 3D Realms' classic first-person shooter Shadow Warrior, the 1997 classic, though sadly we don't get Lo Wang's hilarious commentary. Instead, a standard Eastern-inspired soundtrack wafts away in the background rounding off the experience.

Taking a trip to the Orient is possible on any device where bets from 10 p/c to £/€20 per spin may be set. Red Tiger has made significant statistical changes between this game and the original. Volatility for one has been wound up from low to medium/high, while going hand in hand with this change potential is nearly triple what it was in the non-deluxe. The only stat to take a hit is RTP, which now comes in at 95.77%.

Another critical attribute Dragon's Luck Deluxe retains is the pay from any reel mechanic. As long as 3 or more symbols land adjacently on a payline, starting on any reel, you have a winner. For example, this could be three fish on reels 2, 3, and 4. Symbols have largely remained the same, too, though with a slight graphical enhancement. Starting with the low pays, we find 10-A calligraphically styled royals, followed by more lucrative flowers, fish, dolls, and the '138' symbol. As to values, a line of 5 premiums symbols is worth a payout of 12.5 to 69 times your stake. There are no wilds symbols, yet pay anywhere mechanic and the features involved negate the need for one.

Far and away the most common feature is the Dragon Coin mystery symbol. It lands often, so is central to the Dragon's Luck Deluxe experience. Other extras are Dragon's Help, free spins, and the elusive colossal Mega Coins.

Dragon Coins can appear on all reels, in any position, completely at random. All coins in view spin simultaneously, to reveal an identical symbol type. While they spin, they display a few different symbols before finally revealing the chosen one and making a win evaluation.

Mega Coins are pretty rare, though they can land on either paid or free spins. These are 3x3 in size, and like the smaller Dragon Coins, they flip to reveal identical symbols for a win. Due to their size, plus the pay in any position mechanic, you are guaranteed to collect a payout when a Mega Coin lands.

The Dragon's Help feature is not super common, but it is quite helpful when activated. You'll know when it is because the dragons on either side of the reels blow fire onto the grid. By doing so, they upgrade symbols revealed by Dragon Coins, potentially leading to better results.

You can see why Red Tiger is squeezing all they can get out of the Dragon's Luck franchise. There is something about the way the Dragon Coin mystery symbols operate, which makes them quite entertaining. They can certainly tantalise, tease, torment, whatever you want to call it when they're spinning between low and high pay symbols. Sometimes you're simply crossing your fingers for the highest pay symbols, at other times, you’re calculating what will link up best with what is already on the board. Around they spin, alternating between glory and a sweet, sweet nothing.

More often than not, Dragon Coins result in a modest win, yet, at other times, they surprise by flipping to just the right symbols. Better is when Dragon Coins create a win, then Dragon's Help lights up the grid, upgrading the win to something better. It means the features have a hook, even if Asian gaming isn't really your area of interest. It's also possible for a full grid of mystery symbols to land, which is a nice moment. You know you're going to get something special, the question is how special is it going to be?

Whatever you do win won't be outrageously high, yet Dragon's Luck Deluxe packs a bigger payoff than Dragon's Luck did. This time around, wins as high as 3,888 times the bet are possible compared to the 1,380x of the first one. Of course, both pale in comparison to what their Megaways sibling is capable of, though that one is a completely different kettle of koi.

For good, wholesome, Asian gaming, Dragon's Luck Deluxe is a pretty good choice. It's not a high adrenaline ride, pumping out eye-watering stats, but its features are a nice mix of tease and reward, which should please both fans of the original as well as general Asian enthusiasts.

Fans of Dragon’s Luck get a more volatile, higher potential option while still enjoying the key elements that made the original what it was. 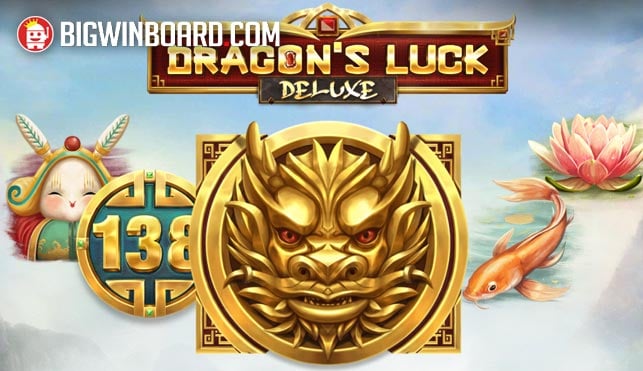