✅ Play Eye of Horus Megaways on

Someone at Blueprint must have spotted an opportunity in the market in regards to the increasingly hard to find classic Eye of Horus slot from Merkur Gaming. Its simple, yet compelling gameplay and volatility, was apparently too tempting an opportunity not to tinker with. Witness the recent Asian version Gong Hei Gong Hei and now a tuned up Megaways version - both from Blueprint Gaming. It's worth mentioning that parent company Gauselmann Group owns Merkur and Blueprint studios before anyone is thinking to call in the lawyers. The latest Eye of Horus incarnation is a slot that looks similar in many ways at first glance, but dig beneath the surface, and you’ll quickly discover that we are dealing with a completely different beast altogether.

The first noticeable change is the game grid. Gone is the traditional 5x3 setup of the original to be replaced by 6 reels with up to 5 symbols on each. This provides a lot more win ways, as matching symbols can sit anywhere on the reels from right to left to form a winner. When they do, they blast off the screen to let new symbols fall to fill in the gaps, causing a chain reaction of wins. That is the key allure of Megaways, licensed from Big Time Gaming. Blueprint has toned the game engine down a bit by restricting symbols on the reels to 5 at the most. This setting is capable of achieving 15,625 win ways, compared to 117,649 with other Megaways slots when 7 rows are in play. Compared to the 10 paylines of the original version of Eye of Horus, this makes a huge difference.

To get the slot rolling, players begin by choosing stakes from 0.10 up to €/£10. Hit spin and the game plays a short tune while the reels spin. This effect instantly reminds you of Eye of Horus' physical slot origins where it was particularly popular in Germany.

Cascading win systems can take a toll on symbol values, where combinations are formed of 3 to 6 of a kind. The paytable has the exact same symbols as the original and starts with card royals J - A at the lower end. These are followed by colourful sticks, ankhs, scarabs, birds and jackals. The Eye of Horus is the most valuable base game symbol with 6 on a full payline giving you 20 times your stake.

Along with Megaways there are two extra features to get the pulse racing. Horus is wild and can substitute for all other symbols in the game except for the scatter. Not just that, but when he lands he Expands to cover a full reel.

The temple doorway icon is the game’s scatter and 3 or more awards 12 Free Spins. The scatter is also the highest paying symbol in the game with 6 of a kind worth 100x the stake. During free spins, the wild’s abilities are expanded further. For one, the Horus Wild can upgrade any of the high value picture symbols. When this occurs, a beam of light shoots from Horus to the applicable symbol, upgrading it to the next one on the paytable. This removes lower paying symbols and increases the likelihood of landing combinations of higher-paying symbols. Horus Wilds also extend the bonus round as 1, 2, or 3 of them add 1, 3, or 5 extra free spins respectively to the remaining total.

So is Eye of Horus Megaways an improvement over the original? A lot will come down to whether you are a fan of the Megaways system or not. The monster number of win ways has the ability to rub some purists up the wrong way in which case the upgrade won’t appeal. If you are a fan of Megaways, or even just okay with it then, yes, the new version is an improvement. And it's not just due to the inclusion of so many more win ways.

Several tweaks make Eye of Horus Megaways a more thrilling and rewarding slot. The volatility and upping the top payout makes the Megaways version a much more attractive prospect. With this version, players can achieve maximum payouts in the region of 10,000 times the stake - easily dwarfing the original slot’s top prize. That alone will make it a winner in most people’s books.

Then again, bigger wins can be had elsewhere so why play Eye of Horus Megaways at all? Perhaps nostalgia will be a factor for fans of the original, curious to see Eye of Horus with a modern twist. Alternatively, fans of land-based Egyptian themed slots might be tempted to see what the game can offer. Whatever the motivation, the first Eye of Horus was clearly a popular slot and Blueprint is banking on in bringing back fans with its latest makeovers.

Eye of Horus Megaways is a fun way to remind yourself to play the classics again. 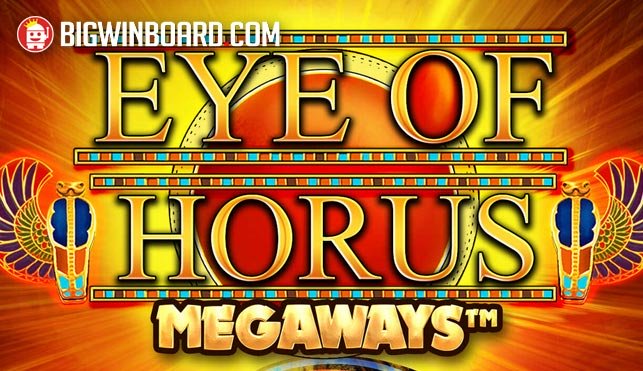