If there is a game type that developer Pragmatic Play seems to favour, aside from Asian, it is those full of fruit. And surely it doesn’t get much fruitier than an actual outdoor fruit party on a 7x7 grid? For a bit of gaming intrigue, the large number of healthy symbols in view is more than matched by a rather high multiplier that can hit build up at any time. With a track history of grid slots and several fruit-fests under their belt, let’s see exactly how hard this Fruit Party rocks.

Visually, it's a bit plain and first impressions brings to mind Sweet Bonanza from Pragmatic Play’s back catalogue. A couple of obvious differences being the larger grid size and the slot’s setting with its sunny, inviting ambience. That goes for the soundtrack as well which is a pleasant EDM/steel drum ditty which has a nice Ibiza meets Jamaica vibe to it. It’s super positive and contributes to the warm feel.

Playable from 20 p/c to £/€100 per spin, players hit winners when clusters of 5 or more matching symbols touch horizontally or vertically. As you would expect with this game type, winning clusters pop from the grid and new symbols tumble into the newly vacated positions. This can set off chain reactions of winners from single spins until no new winning symbols appear and the next new spin can begin.

Funny how many of this seemingly cute and innocent slots bely a vicious math model. Surprisingly, Fruit Party tones down the volatility to a more middling level. Pragmatic Play has aimed for the mid-ground(ish) when it comes to volatility with a medium+ rating. Fruit Party is certainly not as all or nothing as slots can often be from Pragmatic Play. Additionally, most players will be able to get behind the default RTP which has been rated above average at 96.47%.

No second guesses what the majority of symbols juicing the paytable are - fruit, and lashings of it, along with a couple of other cheerful icons. In ascending order players tumble in hearts, stars, plums, grapes, apples, oranges, and strawberries. In high cluster numbers (13 and above) the values get pretty good from 40x the stake for 15+ hearts to 150x the stake for 15+ strawberries. Interestingly, there is no wild - multipliers are what you want and can pop up aplenty.

The Random Multiplier feature is the king around here and show up at random during the base and bonus game. During the main game, any symbol part of a winning cluster has a random chance of carrying an x2 multiplier with it. If this happens to more than one symbol in the cluster, then all multipliers are combined. At max, players can wind up with an impressive x256 applied to the payout value.

Along with the Random Multiplier, the other feature to be aware of is a round of Free Spins. These are triggered when 3 or more golden fruit scatters appear in view and award 10 free spins. The difference between free and regular spins is that here, the Random Multiplier can appear as x4 as well as x2. As before these multipliers can be combined up to a maximum of x256.

Scatters continue to appear and landing 3, 4, or 5 of them will award an additional 10, 11, or 12 free spins respectively. Another thing to note is that there are no limits on how many times free spins may be retriggered.

Fruit Party turned out to be a surprisingly enjoyable game. It looks somewhat plain and basic and you do miss a lot of the overall effect without the soundtrack bobbing away, but in action, it’s light-hearted and fairly entertaining. It’s far from being a revolutionary grid slot, or a challenger to the big boys in the category, but it covers the basics and it’s hard to think of anything hugely wrong with it.

Fruit Party might not appeal to the hardcores who want a high potential rough ride, though the x256 multiplier and 5,000 times the stake win potential might be a temptation. It’s quite a lot like Sweet Bonanza with its gameplay, cheery background, and the way multipliers rack up during free spins. So if you liked that one, Fruit Party might appeal if you want a less volatile session.

Overall Fruit Party is a solid enough slot, there are no major reservations, and as mentioned it ticks all of the right boxes. It just doesn’t have huge amounts x-factor or offer anything super exciting to check out.

If you enjoyed playing Fruit Party, make sure to check out the sequel Fruit Party 2.

Fruit Party covers everything it needs to, and its shortlist of features can be effective, but it could have had a lot more impact with an extra modifier or two. 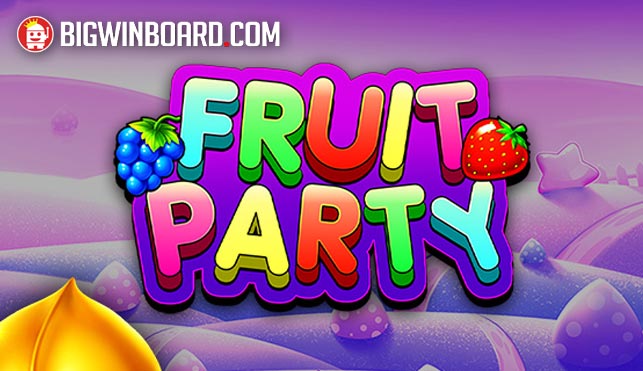