Developer Pragmatic Play adds another title to their growing list of grid slots with the Aztec themed Gems Bonanza. Taking cues from one of the maestros of the genre, Play’n GO, Gems Bonanza is rife with symbol collections systems, meters, modifiers and a stack of extras. As well as grid slots, the developer has quite a few games that use the South American theme, to varying degrees of success. Let’s see how Gems Bonanza fares.

When it comes to Pragmatic Play’s grid slots, they seem to get bigger on every release. Here we are dealing with an 8x8 sized play area, dropping in 64 symbols on each new spin. Surrounding the board is a furnace thing, dripping molten gold, while the other side provides a bird’s eye view of the temple complex. Crooning over the top is synth heavy music that would make a good meditation/relaxation track.

Hitting the plus or minus buttons allows you to set bets from 20 p/c to £/€100 per spin, on any device. Pragmatic went heavy on the volatility, rating it 5/5, meaning the action can just as easily go either way. It might theoretically pay out less often on average, but long sequences of consecutive wins are possible which is kind of what you want to see in a grid slot. RTP is respectable, well the default setting at least, with a comfortably above-average rating of 96.51%.

Players get a win when a cluster, or as they call it here, a block of 5 identical symbols are connected horizontally or vertically. When this happens, the tumble feature is triggered as described below. As the name suggests, there is quite a bonanza of gems on the paytable, where everyone is a hard, shiny object. There are 7 variously coloured gemstones offering payouts of 50 to 1,000x the bet when landing in blocks of 25+. Helping pull blocks together is the wild which does not land on spins or tumbles. Instead, it is added to the board during the Wild Gem or Lucky Wilds feature to replace any pay symbol.

Pragmatic Play has stacked Gems Bonanza with extras, so there is usually something going on, or at least, about to happen. Along with Tumbles are Spin Features, Gold Fever, and the bonus buy.

The Tumble feature clears winning symbols from the grid to let new ones drop down from above. If there is another win, the process repeats, until no new winning clusters appear, then the next spin can take place.

During the base game, on the board behind the symbols, special coloured markings appear in random positions. If a win occurs on top of a marked spot, it triggers 1 of 5 modifiers, depending on the colour. All are activated when the current tumble sequence ends.

If more than one feature is won on the same spin, the modifiers play in this order – Nuclear, Wild Gem, Squares, Colossal Symbol, and Lucky Wilds.

Gold Fever bonus has five tiers and starts at level one. At every level, all spin modifiers are played once in sequential order with a win multiplier starting at x2. Symbols continue to be collected, and when the Gold Fever meter is filled, players move to the next level. The difference being that level 2, 3, 4, or 5 have win multipliers of x4, x6, x8, or x10, respectively. The feature ends when all of the modifiers have been used, but not enough symbols collected to move to the next level. Or, when all spin features from level 5 have been played.

Finally, a feature which seems to be creeping into Pragmatic Play slots more regularly, the bonus buy option. By forking out 100x the current total bet, players are guaranteed a full meter on the next spin, triggering the Gold Fever bonus. The rules of the feature are the same as if it was triggered organically.

It feels like Pragmatic Play has been studying up on the competition, producing a grid slot that mirrors what they’ve been up to. In particular, the win tracker, and the Gold Fever meter have a distinct Play’n GO feel to them. If you can look past this though, Gems Bonanza is a pretty decent grid slot. As well as being nice to look at, though a little impersonal with all those gems, it has several things going for it.

Key among the positives is the gameplay which has a nice flow. Gems Bonanza was largely devoid of extended periods of nothing happening during testing. A large part is due to the glowing marks on the board, throwing up regular modifiers when wins occurred over them. There was a marked difference between the effectiveness of the modifiers. Nuclear would very rarely lead to much additional action. Usually, it cleared the board, and nothing else would happen. Colossal symbols could be useful, provided high-value symbols appeared. The other good one tended to be Lucky Wilds which would occasionally light up a whole bunch of wins, tipping the Gold Fever meter into launching the feature.

The Gold Fever feature proved to be a volatile one. Some passed by almost unnoticed; others were quite intense. They triggered fairly regularly too, though getting past level 2 is a real challenge. Payouts quickly escalate when the bigger multipliers are involved which can reach up to 10,000 times the stake. Possibilities are technically there if you can push it to the later Gold Fever tiers.

All up, Gems Bonanza is a well-made grid slot with nice features and big potential. Not as complex or sophisticated as the best in class, but a fun experience all the same.

While it imitates some elements of other developers’ ideas, Gems Bonanza has the features, gameplay, plus potential to cut through that to make it a thoroughly enjoyable game. 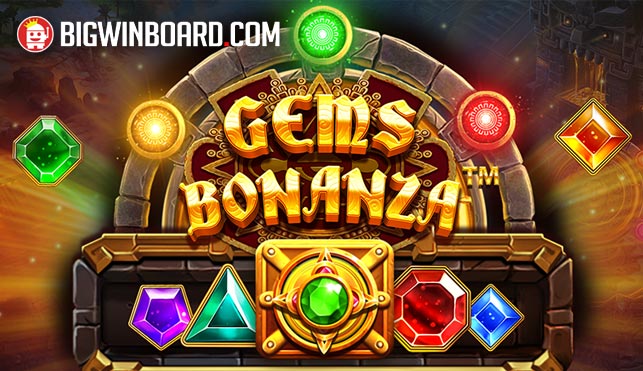