Look out players, a stampede's a coming courtesy of Pragmatic Play's African wildlife slot Great Rhino Deluxe. That great rhino, he's getting a whole lot of mileage. This is the third iteration in the series which started with the Great Rhino, followed by Great Rhino Megaways, and now, the deluxe version. Don't expect masses of change though. Not a heck of a lot is different between this version and the original. Respins are still there, as are free spins plus the two modest jackpots.

Visually, the game has moved on from the original Great Rhino slot. The deluxe version actually looks a lot like the Megaways version, albeit on a reduced grid. Now, we are back to the 5-reel, 20-payline format, set in the majestic African countryside. If you've played one, you'll know the drill - wavy grass, Acacia trees, wide-open vistas, all that sort of thing. Oh and plenty of wildlife on the reels of course.

The soundtrack is a lot nicer than you usually find in an African themed slot. When you start to play, it begins with a rhythmical drum track, but when the chorus vocals kick in it gets quite uplifting. It's like when Rafiki held Simba on Pride Rock on the Lion King – it produces tangibly good feelings. Altogether, the visuals and effects give Great Rhino Deluxe a strong physical slot feel.

Great Rhino can be played on any device, with stakes from 20 p/c to £/€100 per spin available. Default RTP is above average, at 96.5%, but can be found at lower settings, while volatility hovers in the medium spectrum. It's not exactly a rampaging rhino, but the somewhat lenient math model is boosted by a respectable potential.

Tapping the game's potential begins by landing combinations of three to five matching symbols. The 9 regular symbols are all the same symbols we found in the Megaways version, minus a couple of royals and a general reshuffle.

Now, the line-up starts with Q-A symbols, followed by flamingos, hyenas, crocs, gorillas, and cheetahs. This time the rhino is the most valuable regular symbol (rather than the wild as was the case in Megaways), worth 20 times the stake for five of a kind. He also pays out when just two land on a payline. The golden rhino coin is the wild, paying out on two of a kind, or up to 25x for five of a kind. In addition, the golden rhino substitutes for all other symbols except the scatter.

Super respins are triggered when two stacked reels of rhinos land on the same spin. The two stacks get locked in place, and three respins are awarded. During respins, only rhino symbols appear, and any new ones which land add another respin.

New rhino symbols may, or may not, also display an x2 multiplier which gets applied to the line win. More than one multiplier on a line has their values multiplied together. When respins run out, all win combinations are paid. If at the end of respins 14 Rhinos are in view, the Major jackpot worth 375x is paid rather than line wins. If all 15 positions are covered in Rhinos, then players win the 500x Grand jackpot.

The highlight is the free spins feature which activates when 3 scatters land on reels 2, 3, and 4, rewarding 10 free spins. During free spins, whenever a rhino symbol lands, it is collected. Then, on the last spin, all rhinos collected are dropped on the reels in random positions. You better make the most of those spins as the feature cannot be retriggered

In many ways Great Rhino Deluxe is the love child of the two slots that preceded it, taking the original's gameplay and marrying it to the graphics of the Megaways version. On paper, that might not sound uber-deluxe, but in practice, the game plays out quite well, for what it is. The Deluxe is certainly a more holistically enjoyable experience than the original.

Taking a cynical view, Great Rhino Deluxe could be viewed like the director's cut of a movie where 3.5 seconds of unseen footage has been added. Superfluous fluff for diehard fanatics compelled to buy everything they can to expand their collection. There's no denying the changes are fairly modest - a few graphic upgrades, a different audio track, and a tweak to the features. It's simply riding on the wave of brand awareness. Yet, enough has been changed or altered to warrant the 'Deluxe' label.

Then again, for fans of the original it probably won't matter anyway. The game exudes so much positivity it cuts through much of the criticism. A huge factor is the music, combined with the physical slot feels from the graphics and sound effects, to create a game which is easy to like.

Potential has certainly increased - Pragmatic Play claims wins of over 6,000 times the stake are now possible. Okay, it's not a third of what Great Rhino Megaways is technically capable of. Still, it's not a bad haul, though with what players get to work with, it does seem a bit of a pipe dream.

Great Rhino Deluxe probably won't shake the slots world. It's not a high powered thrill machine or even hugely different to the first, but for an enjoyable African slot packing an outrageous feel-good factor, Great Rhino Deluxe isn't a bad choice for those into this style.

The deluxe label comes with a few enhancements and a joyful soundtrack which might make Great Rhino Deluxe an attractive choice for fans of the original. 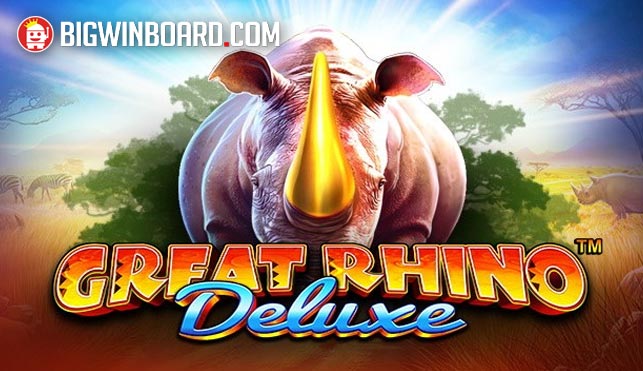