Hellcatraz is a 8-bit take on the famous Alcatraz prison located in the middle of San Francisco Bay. On the surface, this is a world of goodies, gangsters, prisons, and sharks. A suspension bridge has been included in the background, so there is no mistaking where the slot is set. A little more confusing is why developer Relax Gaming added the word ‘Hell’ to the name since Hellcatraz looks rather cute with a retro gaming vibe to it. Then again, it might be a nod to the fiendishly un-cute math model running the show. Despite the title, the game has nothing to do with the underworld. No, Hellcatraz is a slot that draws inspiration from Thunderkick’s Flame Busters which in turn emulates retro video games that kids and teenagers used to play back in the days on systems such as Atari and Amiga.

Its pixelated look is particularly reminiscent of old Sierra pick and click games such as Police Quest 1, or Leisure Suit Larry where you had to type on a keyboard to make your character do things - ‘unlock door’, ‘open door’, ‘talk to man’ and so on. The worst was entering a new screen and having to bash something on the keyboard ultra-fast before some creature charged down and tore you apart. Gaming sure could be time-consuming back then, but it must’ve helped kids learn to type which was a plus.

There is no typing with Hellcatraz, but players do have to choose what mode they would like the game to run on. The ‘softer’ option is Mixed Mode which comes with a high volatility rating. Alternatively, for those that like a challenge, Lockdown Mode comes with a 'very high' volatility rating. Before you dive into the action, however, a crucial step of bet selection must be set, which starts at 10 p/c and goes up to £/€20 per spin. Just as volatility can alternate, so can RTP from 96.46%-96.30% depending on mode. With the bonus buy option activated, RTP increases to 96.88%. Hit rate also changes depending on mode from 19.92% or 23.22%. Essentially, this allows you to decide whether you want to play hard, or not quite so hard. Either way, it's still a volatile game.

In front of the city skyline is the game grid which consists of 6 reels and 6 columns where symbols cascade into place with each spin. Winning symbols can land on any row - as long as there are 3 or more from left to right you have a payout on your hands. When that happens, the winning symbols are removed and new ones drop into the gaps. This means there are chances to score multiple wins on a single spin.

Opening up the paytable brings a feast of pixels in the form of the game’s 9 regular pay symbols. They begin with 4 low pay card suits - diamonds, hearts, clubs, and diamonds. More rewarding are the cuffs, a guard’s badge, a shark, and two characters. One is an Al Capone lookalike and the other is a corrections officer who is the most valuable at 2 times the stake for six of a kind. The big ‘W’ symbol is the wild and appears on reels 2-6. It can substitute for any other pay symbol to create a winning combination.

The developers haven't gone over the top with the features, but it's still a busy game due to all the moving parts and options at hand. During each spin in the base game, there are Mystery Symbols present. Each mystery symbol has a counter which is reduced by 1 each cascade. When it reaches zero, the mystery symbols change to reveal the same pay symbol. In Lockdown Mode, all mystery symbols have the same number on them, whereas in Mixed Mode there are 2 independent values (which might be the same).

Players who like to collect and horde items while playing slots will love Hellcatraz. At random, a small key symbol appears on top of regular symbols. Each one of these key symbols awards 1-10 keys which zoom off the reels to be stored in the Key Collector meter. When 2,000 keys have been collected, then Super Free Spins are triggered. Starting with 5 free spins, you'll benefit from mystery symbols being revealed without any cascades required. Also, golden mystery symbols enter the game - when the symbol is present on the reels, 2 cascades trigger an additional spin.

Players who don’t have the time or patience to collect 2,000 keys can hit the Buy Feature button to go straight to the Super Free Spins. If no keys have been collected, this costs 200 times the stake. The cost can be decreased, however, if players trade in the keys they have already collected.

Hellcatraz is a slot full of charm, interesting ideas and action packed gameplay. With its pixelated retro graphics, Hellcatraz was specifically designed to target those who grew up playing video games in the 80s and early 90s and it does so phenomenally. The game is literally bursting with nostalgia and high recognition factor and every spin is a throwback to a time less complicated. But there's more to Hellcatraz than what meets the eye.

With the key collector feature, there is a sense of mission which further strengthens the whole video game vibe at play here. It can work both ways, of course. If you're not into chase mechanics and collecting-type games, it might come across as a bit slow and stretched at times. Those who like the game, on the other hand, will have no problem with it as it's such an integral part of the action. On that point, skipping the key collection might be quick and easy, but the cost for doing so is pretty steep at 200 times the bet. Moreover, with only 5 spins to play and a feature that often seems over before it started, a low return can be extra painful.

Although not in any way a deal-breaker, the mystery symbols feature can be slightly annoying during the base game. They can be effective when activated, but for a lot of the time they do nothing more than take up precious real estate. If they aren’t active, then you’ve got a bunch of dead tiles on-screen cluttering up the money-making possibilities. On the other hand, they can go absolutely mental during the super free spins which can generate wins of up to 51,840 times your stake.

In some ways, Hellcatraz is a lot like the real-life Alcatraz - many went in, not too many came out to tell the tale. What that means is a highly volatile, winner take all type of slot. It might not be a game for everyone, but if you belong to the lucky ones who got to experience the happy floppy copy days, Hellcatraz will feel like coming home.

Hellcatraz plays wonderfully, looks absolutely fantastic, and serves up pulse-pounding excitement that anyone can appreciate. 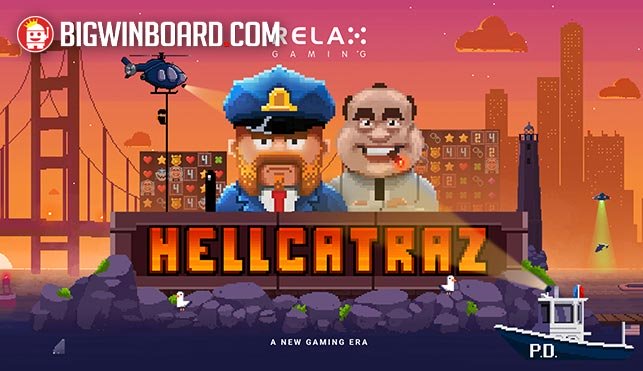