Hyper Burst is pretty straight forward gaming centered around an effective respins feature, provided it stays around long enough to flex what it can do.

The latent power of volcanoes drives the action in Hyper Burst from Yggdrasil Gaming. With streamlined features, Hyper Burst can nevertheless pull in all sorts of modifiers when respins are doing their thing. The result is a game that plays out much like the volcano it portrays. Meaning, Hyper Burst can lie dormant a lot of the time, but every so often blows its stack in an impressive fashion.

The first look at Hyper Burst brought the slot Tahiti Gold to mind, yet it’s not quite so moody. The volcano in the distance isn’t as intimidating as the one found in ELK’s version. Hyper Burst is dreamier. You can imagine ‘Over the Rainbow’ playing on a ukulele as you float over the misty trees and turquoise water into the scene, much like the intro to Coming to America.

When Hyper Burst gets going it’s a different story. In the beginning, the sounds are menacing enough. When respins build, the drumming and chanting increases, so when big wins occur, it feels like some sort of bizarre island ritual is taking place. It gets pretty intense.

Hyper Burst can be played on any device, with bets from 10 p/c to £/€100 per spin available. The activity takes place on a game grid consisting of 6 reels, 4 rows, and 25 paylines, producing an RTP rate of 96.02%. The modest number of paylines isn’t super effective in pulling in wins a lot of the time – until colossal symbols are created via the features.

Wins are fairly regular in theory, officially better than 1 in 5 spins due to a hit frequency of 22.3%. It might not feel like it a lot of the time though. Rounding off the math model is a medium/high volatility, so don’t expect to go all the way with Hyper Respins too often.

To land a win, you need three to six matching symbols, left to right on a payline. Symbols reinforce the Gold series vibe, well the premiums at least, which are four masks in blue, green, purple and red colours. Premiums are worth 4 to 8 times the stake for combinations of six of a kind. At the lower end of the paytable is Jack to Ace card royals, worth 1 to 2 times the bet for a line of six.

The golden wild appears in any position to substitute for all other symbols. It is also by far the most valuable tile in the game – six of a kind is worth 100x, and the likelihood of landing a line of wilds increases when they appear in colossal sizes. That completes the picture when it comes to symbols in Hyper Burst. There are no scatters, yet there is an extensive respins feature generating the game’s best moments.

While there might technically be only one overarching feature – Hyper Respins, several extras splinter off them to enhance the experience. Every win triggers Respin Mode which comes with additional bonuses. The first respin joins 2 of the middle four reels together to form a 2×2 colossal lava reel. Each consecutive win in Respin Mode triggers another respin and makes the lava reel grow in size. The next increment expands the colossal lava reel to 3×3, and finally to 4×4 in size which is known as the Giga reel – no relation to Giga Blox.

When the 4×4 reel is active the game shifts from Respin Mode to Hyper Mode. Here, wins continue to trigger respins, but a win multiplier also comes into play. The multiplier starts at x2, moving up through x3, x5, topping out at x10 if you keep on winning. There is no limit to how many respins will mount up as long as consecutive winners continue to be hit.

It’s almost as if Yggdrasil took a page out of their partner Avatar UX’s playbook when designing Hyper Burst. Similar to slots in the PopWins range, the aim of Hyper Burst is to get on a massive roll where features build off of each other, getting bigger and more potent as they move forward. In this regard, it’s also similar to Yggdrasil’s own Valley of the Gods 2. Like the Egyptian themed sequel, when a bunch of Hyper Respins link up, they can be a real treat. The earth-shaking effects amplify the enjoyment too, a nice touch from the Yggdrasil sound team there.

They say it only takes a spark to light a volcano, which might be true, but sparks can also burn out quickly on their own without making much of a fuss. Hyper Burst is a game that has to go all the way, or a significant part of the way, to get much out of it. During testing, part of the way meant wins in the 200x+ region, but getting past that amount was a hyper rare occurrence. Interestingly, after a session of ups and downs, the bankroll ended up pretty much where it started.

There are loads of single or double respins which don’t go anywhere. Yet despite that, Like Valley of the Gods 2, it’s easy to hit the play button one more time. Just one good roll is all it would take to hit Hyper Burst’s potential of 12,800 times the stake. Okay, it would have to be a pretty epic chain of respins, but still, knowing it is possible makes it easy to justify repeat playing.

It can get frustrating if you’re caught in a patch of dead spins, or short runs of respins which are more tease than thrill. Still, Hyper Burst is a good example of a game that does perfectly well without a tradition free spins bonus, so if you’re into extended cascade sequences and potent respins, it’s most definitely worth a look. 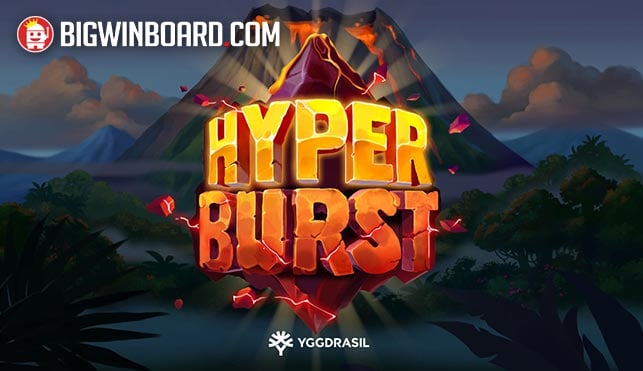