Jolly Dicers has the kind of polarising look, animations, and gameplay that players will either take advantage of or stab with a rusty cutlass.

Jolly Dicers is a quirky online slot brought out by Dice Lab, the company that cannot get enough of the six-sided gaming objects. This is their second slot to be featured on our site, following on from the oddly playable Sugar Cubes. That charming wee game was a little different, but not a bad alternative for some light entertainment. Their second release, Jolly Dicers, is an even more acquired taste than the debut. Safe to say, it's probably unlike anything you've ever seen before.

Jolly Dicers is definitely not without its intriguing aspects with a massive potential possibly the central plank in its allure. If you’re ready to discover the delights of rolling dice on a rolling ship at sea, all aboard.

Deciding whether you like Jolly Dicers or not begins with the game’s look. Graphics and animations have a sort of bobbing effect, reminiscent of noughties PC games like Tales of Monkey Island, or Age of Booty at a stretch. Play takes place on the deck of a ship, and there is a lot going on. To start with, symbols tumble into a 4x4 inner grid which is surrounded by a 1x1 outer grid containing special symbols. Below this 6x6 matrix, a captain and his mate turn wheels on each spin to get the symbols moving. It’s kind of neat and bears some resemblance to NetEnt's Finn and the Swirly Spin, but it's also easy to see how it might annoy people as well. There is so much moving on screen it would have been nice if players had the option to switch off animations. Just a suggestion, others might love the extra atmosphere it all provides.

Before ordering the pirates to animate reels, setting bets is up. Hit the coin icon to do so and choose between 10 p/c and £/€100 per spin. Auto spin is available, but keep in mind that even when activated, free spins must be played manually. While we are on stats, there are a few to get through. RTP is interesting and comes in at 96.39% during the base game, which isn't too bad to begin with, but gets a massive boost to 97.5% during the Gamble Game (which we will look at below). Finally, volatility is quite high as well getting a 4/5 rating on Dice Labs Richter scale, so be prepared for some cold swings in between the hits.

Winners are formed when 4 or more matching symbols are touching vertically or horizontally. When a cluster hits, it is removed from the grid to let new symbols fall into the spaces for extra chances to win. Regular pay symbols are the six sides of a dice 1-6, designed in different coloured bits of wood. The bigger the number, the bigger the reward, and payouts range from 4 ‘ones’ at 0.4x the stake to 16 ‘sixes’ at 9.6 times the stake. There is also a wild that moves along the Orbiting mechanism during the base game. It can stand in for any dice symbol to complete a cluster.

Jolly Dicers rely heavily on its extra modifiers to provide the entertainment and action. During the base game, there are 4 different of them that can help boost your winnings:

The highlight is the Free Spins bonus game, however. When 2 scatter coin symbols land opposite each other on the Orbiting Reel they award 6 free spins. This bonus game consists of a 4x4 grid using the same dice symbols as the base game. At the start of each spin, two dice are rolled, and the numbers they reveal are removed from the next spin to increase the chances of winning. If a double lands, say 2 sixes, the six symbols are removed and one additional spin is added. The bonus game also comes with a multiplier that starts at x1 and increases by +1 for each cascade. The multiplier resets with each new spin.

The last feature is the Gamble Game and the place where it things can go nuts. It is unlocked when 6 consecutive cascades occur during the base game or free spins. The action shifts to a poor soul walking the plank. Players roll dice and can win up to 6x the gambled amount with up to three consecutive gambles being the maximum.

Jolly Dicers was a tricky game to review. The whole package takes time to get to grips with and form a solid opinion about what’s on offer as it comes across as a bit of a mess in the beginning. It’s clear the game was a passion project for the team and the extra bits and animations can take a while to warm to. One example is the clunky way the Orbiting Reel moves special symbols around. No doubt, it was made that way to simulate a rickety rope system, but it can be a bit distracting initially. The same goes for the two pirates turning the reels. So far both of Dice Lab’s slots take a demo or two to get a real feel for them.

If you’re on the fence about whether to try the game, then the potential might help sway you. Then again, it might not. Like a lot about Jolly Dicers, there is a twist involved. To explain, the max win via the base game + free spins won’t get hearts fluttering at 533 times the bet. Yet, like RTP, the potential gets a major boost in the Gamble Game. Max out the Gamble Game and winnings from the base game + free spins can be multiplied by up to 216x (6x6x6). This works out at total wins of up to a staggering 115,528 times the bet. An astronomical amount, probably only matched by astronomical odds. As impressive as those numbers may be, it's very likely that the max payout will be capped.

To sum up, Jolly Dicers has it's not so great aspects - it can come across as too complex, like it's trying too hard, which may put some players off. But, there are positives to Jolly Dicers that take longer to appreciate. For one, gamblers that want to go large might get a kick out of the Gamble Game. Jolly Dicers is different, and conjures up some nice pirating atmosphere, though it's harder to fall for than Sugar Cubes was. Good on Dice Lab for trying something different though and the end result will definitely appeal to some players more than others. 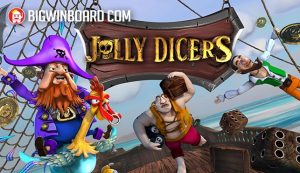 Wtf is this lmfao. The pirates look absolutely horrible. Like that skinny dude in the second screenshot. What’s up with that massive nose haha

This game looks like a complete mess. Someone must have been doing too much coke lol.