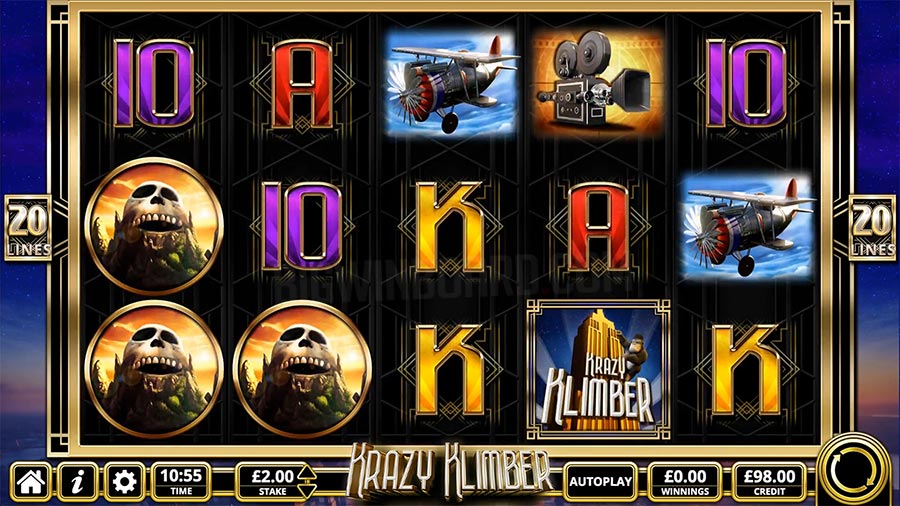 Editor’s note: This review evaluates Krazy Klimber on its early access state, meaning the game might still be under development. We plan on revisiting this review should any major changes occur before the final release.

Cast your mind back to the heady days of 1982 for a moment, when the first CD was sold in Japan, Michael Jackson released his mega-hit Thriller, and The Computer was named Time Magazine’s Man of the Year. Also that year, video game designer Nichibutsu released their coin-operated arcade game Crazy Climber in North America – one of the first climbing games and a precursor to the platform sensation Donkey Kong. Fast forward a few decades, and we now have Krazy Klimber from developer Reflex Gaming. Instead of taking inspiration from the Nichibutsu classic, however, they’ve borrowed the storyline from King Kong, then mashed it with the kind of dated graphics and sluggish gameplay that’ll make you feel like it is 1982 all over again, just not in a good way.

Actually, maybe not 1982 retro, that actually might have been quite cool, so how about 2002 instead? Each Reflex Gaming title we’ve tangled with so far, see Desperate Dawgs or Moley Moolah, has had a cereal box CD-Rom game feel to them, where characters have a smooth-skinned, stretched Ken and Barbie look about them. Krazy Klimber has all of that as it recreates the New York part of King Kong’s story where he climbs the Empire State Building before being peppered by bullets from rickety old biplanes.

The drama takes place on a 5-reel, 3-row grid, where combinations of three or more matching symbols land across its 20 fixed paylines. The game comes in two forms, a 96.1% RTP version or a 94.1% one – both offering varying levels of hit rate, volatility (low or medium), and max win potential. In some ways, the higher RTP version is the most desirable one to go for, except potential is larger with the lower RTP setting. Go figure. Bet levels remain the same on both, where stakes from 20 p/c to £/€100 may be set – on any device.

Krazy Klimber comes with 10 regular pay symbols to score wins – half are 10 to A card icons, while the high-pays are cameras, planes, skulls, damsels, and the game’s logo. Hitting a full line of five premium symbols results in a payout worth 8 to 50 times the total bet. Kong has been appropriately used as the wild symbol who substitutes any other tile in the game except the bonus.

Landing the bonus symbol on reels 1, 3, and 5 triggers the climb feature. For this one, Kong climbs up the building next to a ladder of cash prizes offering an ascending set of values. The prize he stops beside is awarded, which could be a bet multiplier of 10 to 1,000x or 10 to 20 free spins. Cash prizes are paid, and players return to the base game, or you move straight to the bonus if free spins are awarded.

On each free spin, the game may trigger 1, 2, or 3 Super Wild symbols. These are full reel wilds which cover each position on a reel and substitute for any pay symbol. Free spins cannot be retriggered, but on the bright side, when 10 or 20 free spins are won, they come with an additional 2x or 10x the bet cash prize on top.

Once again, Reflex Gaming has released a slot possessing the sort of looks and feels that plant it in a weird no man’s land where it’s neither retro nor contemporary. It just feels dated, and not in a good way, along similar lines as the original Resident Evil game, which has not aged well. There must be a market for this sort of entertainment somewhere since Reflex Gaming continues to power on doing their thing. If you are not part of the target audience though, then Krazy Klimber is likely to fall short in nearly all regards.

Perhaps if the rest of the game was up to scratch, it wouldn’t be so bad, yet just about every element is disappointing. There’s very little about Krazy Klimber that even attempts to lift it out of mediocrity from the limited and unimaginative features to the low-level payouts. The game’s one possible shining moment would be hitting the 1,000x top prize if Kong, sorry the Krazy Klimber, scaled the top of the tower. However, we really had to stretch to find something positive to say.

For a bit more bad news, let’s turn to potential, where the most you can win playing the 96.1% game is 1,257x the bet – achieved once in 1.5 billion spins it should be added, or 3,902x with the 94.1% form. In a peculiar mathematical twist, the ‘benefits’ of both versions (higher return but lower potential vs lower return but higher potential) cancel each other out, and in the end, you’re left with a game that has minimal merit. If Krazy Klimber was not powered by Yggdrasil‘s YGS Masters Program, it’s a wonder how much light of day it would actually see.

If nothing else, Reflex Gaming is consistent, and players for whatever reason who dig their style are sure to find joy in Krazy Kimber’s unique panache. If you haven’t fallen for the studio’s singular charms, then Krazy Klimber comes across as a confused mess of weak stats, clunky graphics, and mundane gameplay.

Krazy Klimber is a train wreck of a slot where everything from stats, gameplay to aesthetics feels botched.