Please be advised – UK visitors are IP-blocked from accessing our demo games due to new regulatory laws. Sorry for the inconvenience.

If you can stomach Magic Maid Cafe’s saccharine taste, the rest of the game is pretty easy to swallow.

Along with slots like Long Pao, East Sea Dragon King, King of 3 Kingdoms, and Imperial Riches, Magic Maid Cafe is NetEnt’s gateway to business expansion into Asia. A bit of research revealed that in Asia, Magic Maid is actually something of a cultural movement. It involves young, not unattractive women, dressed in French Maid outfits in certain Maid Cafés. The roots of this fad lie in anime where many shows contain a character dressed as a French Maid. Other anime series have been entirely based around the maid theme and have inspired hordes of cosplay imitators. The Japanese, in typical Japanese style, took the concept one step further and have opened several Maid Cafés. There, waitresses dressed in French Maid outfits treat customers as if they are ‘important people at home in their mansions.’ Now we know some of the background, Magic Maid Cafe the slot makes a bit more sense. Kind of.

Played on a 5×3, 20 payline reel set, the game is set in a cartoon café decked out with plenty of pink trim with heart decorations and so on. Hit the play button to cause symbols to tumble into place, and away we go. Players control their wagers by selecting a bet level between 1 and 5, and a coin value of 0.01 to 0.5. This equates to stakes of 20 c/p to £/€50 per tumble. Veteran gamers won’t need to press the spin button more than once before being able to identify Magic Maid Café as a reskin of one of the most icon slots ever released – Gonzo’s Quest. And it’s not just the mechanics that’s been cloned, it mirrors the stats in almost every respect. The RTP is identical at 95.97%, volatility is in the medium to high range, and max payout sits at 2,300 times the stake.

Magic Maid Cafe uses brand new symbols that are unique to the game and fresh out of the café. Three of a kind is needed on a payline to create a winning combination. The low pay symbols are 4 different comfort foods such as cookies and cakes worth 0.15x – 5x. The high pay symbols are made up of 3 anime-style cartoon females, and the one with the pink hair is worth 125 times the stake for five of a kind. The mystery muffin is the wild symbol. It can appear anywhere and substitutes for any other symbol.

Designed to target Asian players in particular, there’s definitely a cultural barrier that we find somewhat hard to over come and fully wrap our heads around. In our case, at least, the game fails to charm with a sickly saccharine taste.

If you have played Gonzo’s Quest then you will know what to expect with Magic Maid Cafe’s extras. Most revolve around the Avalanche System™. As the name suggests, symbols fall to fill in the grid rather than spin on a reel. Any winning combination is removed from the screen and new symbols Avalanche into the gaps which provide more chances to win. This sequence continues until no more winners land, and the total is paid out. What makes this feature a bit different from some other slots that use a tumble system is the win multiplier which increases with each new Avalanche. During the base game, the multiplier starts at x1 and increases by 1 with each winning Avalanche up to x5. The multiplier then resets at x1 with each brand new spin.

Look out for the key symbol appearing on the first 3 reels. It is the bonus symbol and will reward you with 10 Free Falls if you land 3 on a payline, or 20 Free Falls if they appear on two separate paylines (you have to see it in action to understand). The rules of the bonus game are the same as the main game. The one exception is that the multiplier moves up in increments of 3, from x3 up to x15. Free Falls can be retriggered during this round by landing 3 more scatters on a payline.

It can be difficult to form an objective opinion about a slot like Magic Maid Café. The theme is so specific, so niche, that if it isn’t in your area of interest, it can be hard to get excited about it. Fortunately for NetEnt, the Maid Café meme is big in Asia, so fans of the theme and gambling now have a new slot to play that covers their interests. In a broader sense, Magic Maid Cafe slides into the Asian themed slot category which NetEnt is hell-bent on cornering at the moment. It’s interesting, on one hand, NetEnt sits comfortably on the edge, pushing the boundaries of what slots can do. On the other, they aren’t above re-skinning their back catalogue to flood the Asian market either. They have demonstrated this zeal via several slots recently such as East Sea Dragon King.

Even with a bit of background knowledge of the Maid Café phenomenon, this is an odd slot. Catering directly for an audience that goes in for a narrow theme can quickly run into a problem. Players who don’t appreciate the concept will have little interest in a slot like Magic Maid Café. Spinning muffins and cookies in a kiddy looking café won’t be to too many tastes. In fact, it feels a little creepy at times. Yes, NetEnt has targeted the adult market, but we are heading into sticky territory with a game that could easily attract underage users.

Gonzo’s Quest was, and still is, a classic slot with a huge fan base. It’s part of countless online casino welcome bonuses so will remain a favourite for a while to come. If you count yourself a fan and are intrigued about how its gameplay fares with a reskin, there isn’t much point. Really, there isn’t much point firing up Magic Maid Café at all – unless anime or baked goods is your jam. Even then, there are other options with more original features and better potential. Try Magic Maid Café if you are interested in experiencing an obscure side of Japanese culture, otherwise, steer clear. 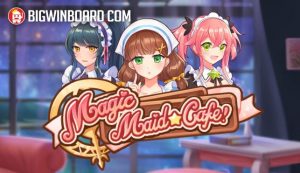 © Bigwinboard.com, 2020. Unauthorized use and/or duplication of this material without express and written permission from this site’s author and/or owner is strictly prohibited and may result in a Google DMCA (Digital Millennium Copyright Act) takedown and/or legal action.

Please Login to comment
Connect with
I allow to create an account
When you login first time using a Social Login button, we collect your account public profile information shared by Social Login provider, based on your privacy settings. We also get your email address to automatically create an account for you in our website. Once your account is created, you'll be logged-in to this account.
DisagreeAgree
1
0
1
1

I know people are going to whine about it but I kind of like it.