Neon Rush Splitz is the second title from Swedish studio Yggdrasil Gaming to make use of their in-house developed Splitz mechanic. The first one, Temple Stacks, is an exotic jungley outing, while Neon Rush is one of those retropunk futuristic 80s slots. This category is both old school and ultra-modern at the same time and is steadily filling up with options.

Neon Rush Splitz is one of the better examples of the genre and a fine showcase of Yggdrasil’s design talents although others may disagree due to the scaled down appearance of the symbol set. Each aspect of the game has been cleverly designed to integrate with each other, and the numbers coming out are an enticement to spin as well.

The initial reaction was instantly positive thanks to a superbly crafted look and feel. Make sure to play on landscape mode if you’re spinning on a mobile for the full effect. If you are, you’ll be treated to a Tron-like world with the 5x3 grid gliding towards skyscrapers in the background. To the side of the reels, players are joined by a motorcyclist who switches sides from time to time and celebrates wins with you.

Along with the visual feast is a treat for the ears via a prime example of the Synthwave music thing that is still going strong. Even the effects used to accompany spins and wins are pitch-perfect. Yggdrasil has a strong audio-visual team, but Neon Rush Splitz is next level. If you’re into this style of game, you will be in retro electro heaven.

When selecting bets, there isn’t a huge range on offer, probably to limit exposure from the Ultra Jackpot. Stakes start at 10 p/c and can be set as high as £/€40 per spin. Other numbers are good, such as an RTP of 96.03%, a high volatility, and a hit rate of just over 1 in 5. Neon Rush might be modern, but the rules are simple.

The key is to land combinations of three or more symbols for a winner. There are just 10 paylines on which to do so, but the way the Splitz feature works gives it a twist. When Splitz symbols land they divide into 1-5 common symbols - less than Temple Stacks which had up to 9. All Splitz on the same spin reveal the same symbol, and during the base game that can be any other in the game.

The symbols used are all custom made and encapsulate the spirit of a game that is simple yet futuristic at the same time. There aren’t many, and on the low side is a triangle, diamond, and a hexagon. The two premiums are a pink shard and a green shard - 5 premiums across a full payline are worth 2 times the stake, but thanks to the Splitz feature, there can be combos of up to 15 of a kind which are worth 500 times the stake. Last up is the wild which only appears when revealed by a Splitz symbol. Up to 5 can be revealed per Splitz, and they can substitute for any other pay symbol.

Features are fairly simple and are a mix of free spins and jackpots. To have a go at the big money, players need to land Jackpot symbols. These are revealed by Splitz symbols which can hold up to 5 jackpot symbols each. Whenever a Jackpot Symbol is revealed, it moves the jackpot meter along like so :

To help with cracking jackpots and winning more coins is a Free Spins round. This one can be a little tricky to land due to the low bonus frequency and volatility which is likely to make up for the massive jackpot potential. To trigger them, players need to land 3, 4, or 5 scatter symbols to be awarded 10, 20, or 30 free spins respectively. During free spins, Splitz symbols only reveal wilds or jackpot symbols.

Neon Rush Splitz is a really well designed and built slot. Graphics and sounds flow seamlessly to create an absorbingly futuristic atmosphere. Background animations bring the game to life and the fellow motorcyclist means you are never spinning alone. If these types of slots are your jam, then Neon Rush Splitz is like driving a purple Trans am with the HUD from an F-16 off a cliff into the nearest galactic nebula, or jacking straight into Tron. It’s the perfect game for the Mr Robot, Stranger Things, Bladerunner dystopian future crowd.

The actual game itself is a good one too. The Splitz mechanic has matured nicely and provides some intense moments. For instance, if you’ve got a few shards lined up and you are hoping for one more from the Splitz symbol to make a line. Then it opens to reveal a bunch of wilds which pulls in way more lines than you could have hoped for, it’s a nice moment.

Splitz symbols only get better during free spins too since they bestow only wilds or jackpot symbols. Neon Rush would still be super playable without the Jackpot, but knowing that any spin could result in payouts of over 25,000 times your stake certainly adds to the fun. Especially when Splitz symbols start revealing jackpot symbols slowly, one at a time to build tension.

What Yggdrasil has created in Neon Rush is a fine example of the genre and one that is unmissable if you are a fan of this style. If that’s you, kick back and enjoy the vibe and the excellent gameplay. If not, well, Neon Rush Splitz still has the solid, straight forward action and jackpots to entertain a wide range of players. 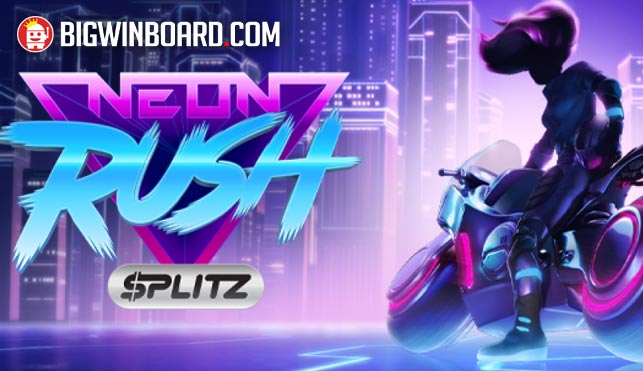