For its online slot title Net Gains, Kindred-owned provider Relax Gaming has once again teamed up with casino streaming community Casinogrounds in what is now the third collab between the two after Iron Bank (2020) and Beast Mode (2022). Net Gains sees a gang of anthropomorphic animals cast off from Venice Beach to find treasure on the high seas. And why not? A 600+ pound bluefin tuna was sold in Japan in 2019 for $3.1 million to sushi restaurant proprietor Kiyoshi Kimura. Catch a few of those, and you'd very likely be 'printing'. Sorry, it might be hard to avoid one or two streamer cliches as we plough through Net Gains. The good news for players not in the mood for another Fishin' Frenzy or Big Bass Bonanza wannabe is that Net Gains is neither of those things. It's very much its own denizen of the deep, packing a wide selection of features in its net. So let's cast off and see what we trawl in. Apologies, there might be one or two fishing cliches as well.

As alluded to, Net Gains is situated offshore, where a boat bobs up and down in the water while some feel-good tunes add bounce in the background. On board, we catch back up with the Lion character and his buds – the Shark, Croc, and Rhino as they dangle traps overboard to collect sea life. The look and vibe are quite different to both Beast Mode and Iron Bank, being perhaps not quite as visually lush as those which preceded it. Even so, the audiovisual presentation is top-notch, and there is little to complain about. There's a positive buzz in the air, and once the game started doing its thing, any doubts that the less detailed graphics might have induced were washed away in a tide of salt water and fish guts. Hint - if you click the bell at the top left corner, you'll hear casino streamer Letsgiveitaspin (Kim) call out his "ding ding" catchphrase.

Being a game made in conjunction with a streamer community, there shouldn't be much of a surprise to know Net Gains is a highly volatile slot, rated 5 out of 5 in this regard. It also comes with a number of ways of being played. The standard approach is to pick a bet of 10 p/c to £/€60 per spin and tap away on the play button. Or, users may have the option of activating the Special Bet, which ups the spin cost by 20% while upping the chance of triggering the bonus round by 82%. Finally, where available, players can buy bonus round access for the cost of 100x the stake. Being a Relax Gaming production, the RTP is dependable and comes in at 96.1% when playing regularly, bumping up to 96.5% for the feature buy.

Net Gains' action happens on a 5-reel, 4-row matrix, supplying 4,096 ways to win. This occurs when matching symbols land from the first reel, left to right, over consecutive reels. At least three-of-a-kind are needed to form a winning way, whereas six-of-a-kinds pay 0.6-1.2x for the 10-A card symbols, or 2 to 25 times the bet for the chests, liquor bottles, octopi, crabs, or lion premiums. Winning ways are removed from the board when they hit, allowing symbols to cascade down into the gaps. If a new win is created after the symbols drop, the cascade process repeats. Finally, shark wilds appear on reels 2-6, and their base job is to replace any normal pay symbol to help complete a ways win.

Net Gains is a game that likes to do things by threes. For instance, the base game benefits from three different mystery symbols, while there are three bonus rounds to choose from when they are organically triggered or bought. In the base game, the three mystery symbols are:

Collecting 3 scatter symbols triggers free spins where players can choose from one of these three options – Sticky Mystery Free Spins, Stacked Wilds Free Spins, or Coin Collection Free Spins. In all three, landing an extra spins symbol awards +2 more free spins. This symbol is removed from the grid if other symbols are destroyed. Also, Hot Mode can randomly trigger at the start of any bonus round. When it does, there is a greater chance of hitting something big.

This one comes with 7 free spins, with two types of wilds appearing on reels 2 to 6. One is multiplier wilds bearing values of x2 to x5; the other is countdown wilds which always start with a counter of 3. Each time countdown wilds are used in a win; their counter decreases by 1. They are removed from the grid if included in a win while showing a value of 1. Countdown wilds that are not removed at the end of a spin drop to the bottom of the reels in the next spin if there are any spins left.

The Coin Collection feature starts with 8 free spins where coin symbols may land, displaying bet multiplier values within set ranges. These are Bronze (1x-40x), Silver (3x-100x), and Gold (10-2,500x). A collector symbol can land on the rightmost reel on the initial spin or on cascades. If it hits at the same time as coins, their values are awarded. Coins landing on the following cascade will still be awarded. It's possible to land a persistent collector (one per spin), which stays at the bottom of the grid for the remainder of the feature, collecting any coins. Another +5 free spins are also awarded when a persistent collector lands. If 4 or more coins hit, but there are no collectors, the coins are removed and their values stored. This stored amount is paid out if a collector lands on a future cascade on the same spin. Landed coins also add +1 to a meter. When the meter reaches 10, an extra spin is awarded, and the ranges for each coin type are increased. After five complete collections, the range does not increase, but an extra spin will still be awarded. Lastly, it is possible a coin rain occurs, dumping 10 coins of the same type onto the reel.

That might have seemed like a lot to get through, but in action, there's nothing overly complicated about Net Gains. It powers through game phases, firing off cascade wins when they hit, turning up the odd mystery symbol, though some can feel as precious as pearls at times. The bomb mystery symbol seemed especially elusive to find. Maybe because Net Gains is the third Relax Gaming, Casinogrounds hook-up, it didn't smack as hard as the previous two slots did. Perhaps it's because it's not as graphically detailed, nor the back story as evolved as a bank robbery or hanging out in the cultural melting pot that was Beast Mode. Net Gains is chipper and all, but it kind of boils down to a bunch of buds out on the water doing a bit of fishing.

Fortunately, Net Gains also packs the sort of gameplay which can punch through that to deliver thrills. Having multiple bonus rounds players can select from is a trademark element in the three games so far, and it is nice to have options. In terms of results, all three were capable of dishing out exciting moments during testing, the screen at times awash in wilds or mystery symbols. The Coin Collection round had faint echoes of a traditional money symbol collect mechanic feature common in fishing slots, albeit with several tune-ups. Possibly done on purpose so that fans of money symbol collections don't miss out or have to inconveniently switch to a different game if the mood strikes. Moving on to the subject of winning opportunities, Beast Mode's max win was about half of Iron Bank's was while Net Gains drops a little further, to 15,000 times the bet.

The dip in max win mirrors, to an extent, a dip in the creativity on display through Net Gain's gameplay. Don't get us wrong; Net Gains was a highly entertaining game to review and play, with plenty of meaty features to play around with. It might not be quite as wow as the previous two, but Net Gains is still capable of dredging up plenty of fun when it's on a roll.

Net Gains might not be quite as wow as its predecessors, but is still capable of dredging up plenty of fun when it’s on a roll. 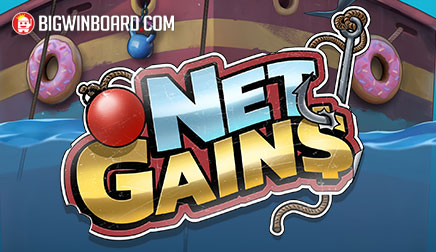