Nyjah Huston - Skate for Gold is another solid Play'n GO release, but it's a lean package that fails to fully capitalize on its foundation.

Your first reaction to Nyjah Huston - Skate for Gold might be 'Nyjah who?'. If you don't follow skateboarding, it is easy not to know Nyjah Huston has won more prize money than just about every other professional skater on the planet. As if all that cash wasn't enough, he's now done a deal with Swedish workaholics Play'n GO for a branded slot using his name and imagery. Nyjah Huston - Skate for Gold doesn't just use his name, animated Nyjah's turn up all over the place, integrating with a range of features.

Nyjah hails from Southern California which is where the game is set. The 5-reel, 10-payline game area is bordered by sunny images of possibly Venice Beach skate park, or somewhere similar, at the end of a hot summer day. A dreamy LA sunset lights up the right side of the screen, while a pop-punk skate tune plays through your speakers. Simple in some ways, though still a pleasant environment in which to either skate or spin reels.

Nyjah is far from being Play'n GO's gnarliest moment from a mathematical standpoint. Volatility has been rated 4 out of 10, making it rather tame by Play'n GO's standards. Other stats are more familiar such as a default RTP of 96.2% and solid potential. As always, RTP may be set lower should the operator so choose, so make sure to check the game docs before firing up. Players drop in by setting a bet from 10 p/c to £/€100 per spin.

If you were 'core back in the day, you might have lived by the 'Skate or Die' creed. The name Skate for Gold doesn't quite have the same ring to it, but the game has a touch of old school fluorescence via the graffiti styled symbols. They might look like card royals at first glance, but no, the letters S, K, A, T, E make up the low pays. Next are the highs which consist of five Nyjah symbols – four trick symbols and a face shot. The face shot is the most valuable since 5 on a line add up to a 25x win.

Getting Nyjah to do his thing is the key to much of the games features, such as Combo Meter Tricks, Wildboard Respins, and SKATE free spins. On any base game spin, the Combo Meter may become active. This meter shows up above the reels, displaying a trick. If the corresponding trick symbol appears anywhere on the reels, then a Wildboard Respin is triggered.

During a Wildboard Respin, two wilds plus one expanded wild (which covers a full reel) is added to help hit a winner or two. It is possible for the expanded wild to turn into a special Golden Wildboard bringing into play a multiplier of x2, x3, x5, or x10. Wilds can substitute for any other symbols except golden SKATE symbols. Also, a line of 5 wilds is worth 40 times your stake.

Lastly is the free spins round. As well as the standard S, K, A, T, E symbols are golden versions. If the golden versions land to spell S-K-A-T-E over all five reels, then 12 free spins are awarded. In free spins, the combo meter is active on every single spin, displaying three tricks. The goal is to land the respective trick symbols in order from left to right on any reel, in any position. When that happens, a Wildboard Respin is triggered, and 2 extra free spins are awarded. The current set of tricks is then reset with a new batch.

There is always a danger when corporates use a subject like skateboarding. Perhaps not so much nowadays where it feels like everything has been corporatized and nothing is sacred - but back in the day more so. The risk is doing something that smacks of cashing in on a pastime that, for many, should remain pure. Of course, 'pure' is an extremely subjective word.

So is Nyjah Huston – Skate for Gold a cynical cash grab by a board room of suits trying too hard to be hip, or is it all just a harmless bit of fun? Well, we'll let you decide. For now, let's stick to judging Nyjah on its slot merits and whether or not it's a good game.

There are moments for sure, but Nyjah doesn't completely shake off the corporate taint. The game also suffers from Play'n GO-itis. This is where a competent, above-average slot, might have been outstanding if more time, passion, or love had been poured into it. Perhaps Nyjah Huston- Skate for Gold did get the full treatment, but it's hard to imagine, considering how frequently Play'n GO release slots.

Of course, high frequency doesn't automatically equate to low quality, and somehow the Play'n GO wizards manage to consistently produce solid games. But a project like Nyjah Huston could have been all-time in the hands of a skate fanatic. For an action sport themed slot, however, Nyjah Huston comes out on top when directly compared to Yggdrasil Gaming's Nitro Circus slot, even if not as daring in its execution.

As things stand, Play'n GO has pushed out another playable slot, with decent features, and potential. Nyjah Huston is unlikely to appeal to 'core gamblers since it’s far less volatile than their slots tend to be. This makes it one for skate/ Nyjah fanatics, or those who gamble in metaphorical knee pads perhaps. 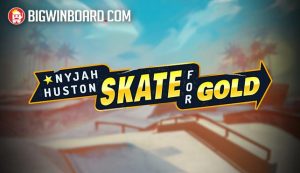 Getting A LOT of Tony Hawk Pro Skater 4 vibes from this one, which of course is intentional. The music, collecting the SKATE letters etc.   On the review you mention the risk of coming off as exploiting in these cases, but personally I think when its skating its fine. Im not a skater so I don’t know for sure but I’ve always had the impression that the skating videogames promoted skating more than anything else. Of course you can always say its a different thing for slots but its not like a bunch of non-slotters are gonna play this… Read more »

You got a lot of interesting points, so play n go should really take some notes. What bothers me most is the last part you mention. 5,000x potential, like, how the fk would that even be possible? Very low volatility and low paying symbols. I suspect more realistic potential is somewhere around 500-1,000x. I bet the license was expensive so it’s probably going to pay shit 😛