Pushy Cats from Yggdrasil is one of those games that makes you wonder what life would be like if intelligent species evolved from something other than apes. In this instance, we are talking about felines, meaning probably be a lot more napping taking place, which wouldn’t be so bad. There would also be plenty of game shows if Yggdrasil’s creative team has any say in the matter, since this is where Pushy Cats is based. Not only does the game show setting provide an upbeat attitude, but it also lets Yggdrasil conjure up a busy bonus round full of walking wilds, a progressive win multiplier, a bunch of bouncer symbols, and big potential. Let’s see how it all works.

At first, Pushy Cats looks a bit basic, there’s something disarmingly simple about the game area and the symbols it holds. A Golden Fish Tank feel permeates throughout due to the cartoon look and loads of animals everywhere. In this case, it’s cats, who make up the audience, bobbing around to celebrate wins, game show hosts, and wide-eyed felines on the wild symbols. There’s a vaguely Pokémon vibe going on here too, and while everything looks relatively innocuous, Pushy Cats is a rather high wired slot.

Part of that assessment is due to the highly volatile math model, pushing out a solid return to player value of 96%. Played using 5 reels and 20 paylines, hits have a frequency of 20%, occurring when matching symbols land from reel number one in adjacent reels. The game’s max win is rather impressive at 20,000x, which players can attempt to crack on any device, selecting stakes of 20 p/c to £/€100. Or, if available, you can engage the Golden Bet option, thereby increasing the stake by 25% to have 3x more wilds. Since wilds trigger the bonus game, this can be useful.

Three to five matching symbols on a payline translates to a payout, where the symbols start with J-A worth 2-5x the bet for five of a kind. On the higher side, we find double fish, a larger fish, meat, and a bell, worth 10-25 times your stake for a five-symbol combo.

Pushy Cats offers the sort of features that build on top of each other, levelling up as they go, though it is possible to skip steps. It starts with the wild symbol, which lands anywhere to replace any of the regular paying symbols.

Landing a wild symbol in the base game awards a sticky wild respin. Triggering wilds remain sticky, and if a new wild lands on the respin, another respin is awarded. This continues until no new wilds land, or you achieve three wilds on the reels.

Landing 3 wilds in the base game, either from a regular spin or via sticky wild respins, triggers the bonus round. When the bonus game triggers from the base game, players are randomly awarded bonus level 1, 2, or 3 to start with. This can be gambled to reach a higher level, with Level 3 being the best. The higher the level, the more modifying bouncer symbols there are and fewer vortex symbols.

There are quite a few parts to this, starting with a global multiplier applied to every win, and which increases by +1 following each win. Also, the triggering wild symbols remain on the reels, moving to a neighbouring position before each spin.

When a wild lands on one of these modifying bouncers, it moves back to its original position, and the bouncer turns into a vortex.

Pushy Cats was a game that had our opinions bouncing around all over the place from positive to less so, a lot like bouncer tiles in the bonus game. The first impression was mixed, the cartoon graphics not exactly dazzling with brilliance despite all the bright lights, but the odd feline-based world did intrigue, as did the game show setting. Once the reels started rolling, it was a case of sitting back and waiting for as many wilds as possible to land, moving play to the next stage of the show.

The bonus game had a vaguely Lightning Box feel to it, something like Astro Pug or Astro Cat Deluxe, one of those Astro ones. Fortunately, Pushy Cats isn’t as convoluted nor as plasticky, and there is a real tease/reward dynamic to the bonus round. Like real-life cats, walking wilds have a mind of their own, and you can will them to drift towards modifying bouncer tiles all you like, but if they’re ready to bow out, they’ll happily leap onto a vortex and ruin your plan. Sometimes they’ll even do this before the first spin. It goes without saying that starting on as high a level as possible is your best shot for maximising returns, and the gamble option can be tempting if you’re awarded level 1. While results during test runs were mixed, Pushy Cats has a surprisingly high max win figure, going as high as 20,000x the bet.

On a positive note, Pushy Cats is quirky, doesn’t take itself too seriously, and deviates from the norm. Whenever a game forks off on its own path, not everyone will be keen to see where it ends up. However, for something a bit different, Pushy Cats is worth a look, though there is a sneaky suspicion that without the massive potential, the game would be a fraction as enticing.

Pushy Cats is a bit quirky, a bit fiddly at times, but solid potential helps sweeten the deal. 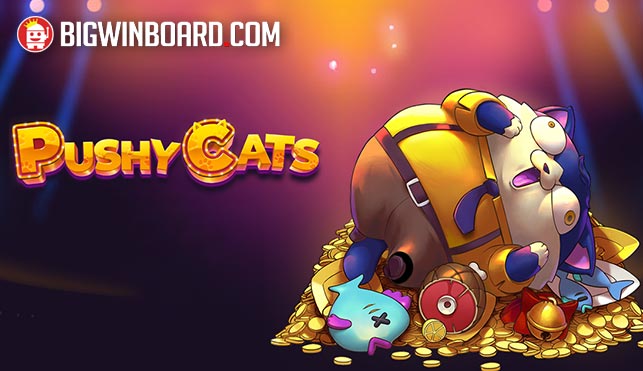