It might take perseverance to unlock the full capabilities of Serpent Shrine, but rewards are there in a sharp, along with an intense bonus game and a lushly drawn environment. 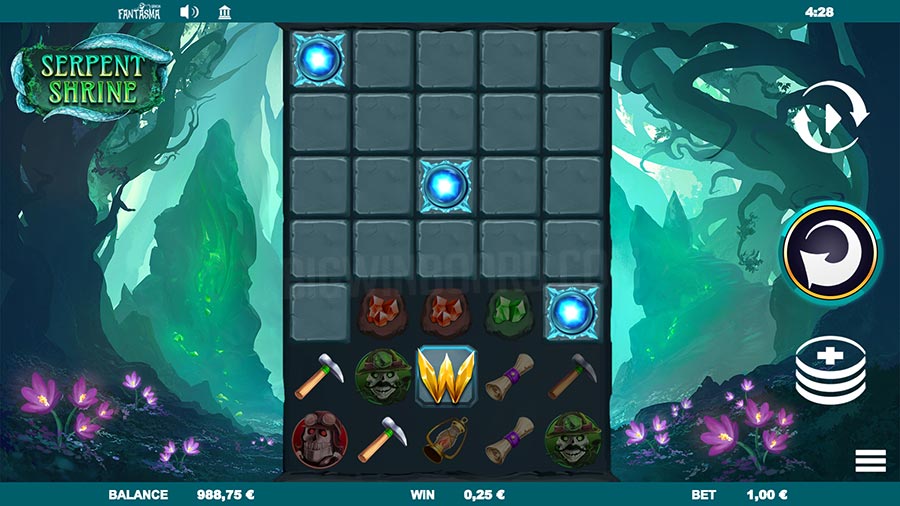 With Serpent Shrine, Fantasma Games has stuck to the fantasy theme that has served them well in their previous releases such as Heroes Hunt Megaways, and Hades River of Souls. Both of which are feature-rich games, yet Serpent Shrine takes it next level in a slot full of extras, expandable elements, and two potent free spin bonus games.

Fantasma went into full game building mode when they designed Serpent Shrine, as they often tend to do. It is set deep in one of the world’s hidden places, uncovered by a group of explores in an ancient forest. A path led them underground where an enormous snake guards a hidden treasure. They escaped once, but the lure of treasure brought them back. So far no one has returned from this underworld grotto.

It’s here players join the story where Fantasma Games has created an enticingly atmospheric environment. It’s all gnarled twisted trees, rocky outcrops, and luminescent flowers swaying in the breeze. The look is similar to Hades River of Souls, sharing that same cartoonish, yet slightly sinister quality.

The look might be Hades(ish), but that’s where the similarities end. Serpent Shrine is played on a grid made of 5 columns and 7 rows. However, not all positions are active in the beginning. At the start of new spins, players access a 2-3-3-3-2 section of the grid – the remaining blockers tiles are removed by the Butterfly and Bomb feature as you will see.

Playable from 20 p/c to £/€50 per spin, Serpent Shrine offers a solid theoretical RTP of 96.55%, while volatility is classed as high by the developer. Nearly one spin in four results in a payout, keeping the flow going, thanks to a hit frequency of 23.37%.

On each new base game spin, there are 108 win ways, though this figure expands to 16,807 when the grid is clear of blockers. The symbols involved are a theme friendly mix, split into low, medium, and high pays. The low pays are mining accessories such as picks, maps, and lanterns, followed by three mid pay coloured minerals. The explorers mentioned above return as the high pays, in an undead form. Now they’ve become - purple, green, and red skeletons, worth 2.5x to 3x the bet. However, they pale in comparison to the serpent symbol which is worth 10x the stake for a line of five.

The last symbol to cover here is the golden shard wild. It’s not worth anything on its own, but it subs for any other pay symbols to string together a combination.

Serpent Shrine’s task is to unlock positions on the board to access greater rewards. Players receive help from two sides– the Butterfly and Bomb feature. Once they’ve done their job, greater returns are possible in Snake Free Spins, or the fabled Super Free Spins.

First, winning with a Butterfly Wild symbol sends it fluttering around the grid, unlocking 3 random positions, awarding a respin. If more Butterfly Wilds appear on respins, they keep the process going until no more winners land, or they clear the grid.

Secondly, at the start of a base game spin, 3 bomb symbols a randomly laid on blocker tiles. If a butterfly hits a bomb, it detonates, destroying a row or column of adjacent blockers.

Should both of these modifiers clear the grid, then 5 Snake Free Spins are awarded. This feature starts with the full grid and 16,807 ways in play. On each spin, a giant snake makes its way down the board row by row, reducing the win ways. However, as it does so, a win multiplier increase on each spin from x1 to x2, x5, x20, up to x100 on the fifth spin.

In a final twist, if 3 Butterfly Wilds land during Snake Free Spins, they flutter off to kill the snake, activating 2 Super Free Spins. These spins are played with the full board again, but with the 100x multiplier active on both spins. Super Free Spins play after Snake Spins have completed.

Serpent Shrine picks up right where Hades River of Souls left off while taking things in a new direction. The studio has landed on a distinctive look, and their apparent love of fantasy is paying dividends in the slots they create. Serpent Shrine is another strong game that won’t appeal to everyone, but shows Fantasma isn’t afraid to keep forging along the path they have created.

Even if you’re not in the mood for a complicated slot, you have to acknowledge Fantasma Games are doing something that stands out. What is also clear is that the studio isn’t afraid of experimenting with features. Clearing the grid for free spins isn’t totally new, but what happens next is quite unique.

You don’t get many Snake or Super free spins, and it doesn’t guarantee winners will land, but when they do you get some pretty decent multipliers to make the most of them. The elusive Super Free Spins are where the game can get edgy indeed, and payouts average 743 times the stake from this feature.

Those chasing big wins will be pleased to know that potential of up to 10,000 times the stake awaits successful explorers. You might not get many free spins to utilise, and they don’t always end in triumph, but for a short sharp blast of intense gaming, they are pretty satisfying.

All added up, Serpent Shrine won’t be to everyone’s taste, but if you’re after a slot with complexity, a mission, and a back story, then it’s well worth a look.