It might not get any more unimaginative than a fruit-themed clone, but Shining King Megaways is a solid option for fans of the format.

For their fifth whirl on the Megaways game engine, developer iSoftBet has decided to clone one of their earlier slots Majestic Megaways. The original wasn’t groundbreaking material to begin with, yet any sort of intrigue it might have had is erased by giving the rehashed math model and features a fruit theme. This might be great news for players looking for a fruity version of Bonanza, not so desirable for others.

Shining King’s reels sit before a red curtain as if waiting for a spectacle to start. Is it the star of the show or part of the audience? The look is vaguely physical, similar to Stakelogic’s Runner Runner Megaways, or Super Wild Megaways, though not so realistic. 8bit sound effects reinforce the old school atmosphere, bleeping away over a nice jazz club soundtrack. There are bits of all sorts happening here, such as the crown/regal references which bring to mind Reel King Megaways. The overall effect is akin to dry white toast, so generic is the look.

On each spin, up to 7 symbols land on each of the 6 main reels, while 4 appear on the top horizontal tracker reel. Win ways change on each spin too, and up to 117,649 are possible when the reels are filled with the maximum number of symbols. Standard Megaways stuff in other words.

Shining King Megaways may be played on any device, offering bets from 20 p/c up £/€20 per spin. If you’ve seen Majestic Megaways, then the stats make for repeat viewing. They start with an RTP of 96.11% in the default mode, rising to 96.86% when the bonus buy option has been selected. As before, volatility clocks in at medium/high, while potential is certainly way above average.

The symbols are common icons of yesteryear. From low to high, there are cherries, lemons, oranges, plums, grapes, and watermelons as the low pays. Land six of these to win 0.8 to 1.75 times your stake. Four are left over for the high pay symbols, including bells, stars, and dollar signs, worth 2 to 7.5x.

The most desirable symbol is the lucky seven. For one, just two lucky sevens are enough to payout, while 6 of a kind is worth 50 times the bet. The game also has a wild which substitutes for any symbols except the scatter. Wilds only appear on the top tracker above the main reels.

Players who never want to spin the same thing twice, be prepared, there aren’t any features you haven’t seen on multiple occasions before. The most common is the cascade mechanic, which is joined by mystery symbols and free spins.

Whenever a winning combination lands, the cascade feature is triggered. The first thing it does is remove the winning symbols from the reels, allowing new ones to cascade down into the empty gaps. New winning combinations may line up, perpetuating the feature. When no more winners appear, the next new spin takes place.

On any spin, Mystery symbols may be added to any base or bonus game spin. A number of ‘?’ symbols land, then all transform into the same matching pay symbol.

The mysterious king uses his crown as the scatter symbol to trigger the bonus game – 4 scatters award 12 free spins, plus 5 more spins are added for each extra scatter in view up to 27. During free spins, an unlimited win multiplier enters the picture. The multiplier starts at x1 and increases by +1 after every cascading win. After a cascade sequence, the multiplier does not reset but holds its value between spins. The feature may be extended by the scatters which appear on the tracker reel only. Landing three or four scatters awards 5 or 10 free spins respectively.

Don’t want to wait for four scatters to show up on their own? Players who wish to skip the main game may be able to do so if the Crown Bet bonus buy feature is available. For the cost of 75x the total bet, four or more scatter symbols land on the next spin to trigger free spins.

So while there’s nothing new in Shining King, fans of classic slots with a modern twist won’t find much to complain about either. It’s been designed to a decent standard, the presentation is sparse but tasteful, and the jazz tones add a touch of class. It’s like eating at your favourite restaurant for the 114th time. It might be the same old, same old, but you know what to expect.

Then again, it does mean Shining King looks like 50,000 other fruit slots out there, only it’s powered by Big Time Gaming’s big ‘ol game engine. It’s definitely not as lush as some of iSoftBet’s previous Megaways slots like Dragon Match, which have been quite stunning visually. Not to mention this combination of features shows up so often it’s become the de facto Megaways starter pack.

In summation, if the two words ‘fruit Megaways’ get you pumped, then, by all means, load up Shining King and prepare to have your hair blown sideways. If on the other hand, nothing could rock your world any less, then you’ll struggle to find much in Shining King Megaways to convince you otherwise. 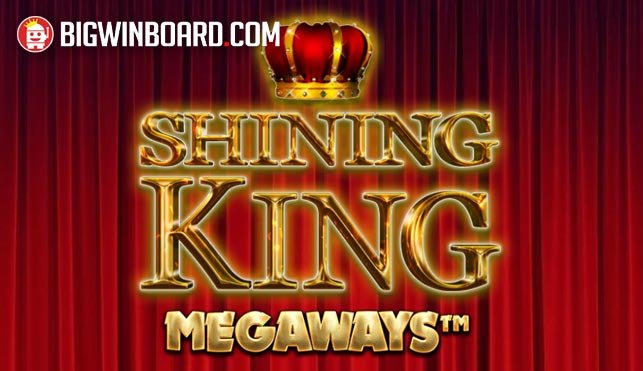