Developer ReelPlay ship their trademarked Infinity Reels system over the vast Pacific Ocean for the slot Tiki Infinity Reels Megaways. As you can gather from the title, they’ve also teamed it up with Megaways on license from Australian colleagues Big Time Gaming again. The combination of mechanics might seem a little overkill, but it worked pretty well the first time in Odin Infinity Reels Megaways. Despite Odin being the first meeting of the two game systems, questions arose. Specifically just how versatile can Infinity Reels™ be? Let’s see if Tiki can go some way to answering the query.

Sparkling blue seas, a hazy sky, and swaying palm trees greet players when Tiki Infinity Reels Megaways loads. In the middle of the screen lazing on golden sands is a bamboo framed 3-reel game area. ReelPlay has painted a nice laid-back scene, made extra chill by a soundtrack that mixes a Survivor beat with a lounge bar vibe to produce the sort of music you might expect in a Fijian elevator.

Beach getaways are available on any device, offering stakes starting at 30 p/c rising to £/€90 per spin. Tiki Infinity Reels Megaways boasts a slightly above average 96.07% RTP, and gameplay that has been toned down since Odin. Volatility has decreased to a medium plus level, matching a reduction in potential – half of what was available before. Wins land often, which is unexpected given the way reels are added. To even them out, symbol values are low. Add it all up, and the gameplay feels looser, less intense than the previous one was.

When it comes to the rules things are a titch more complicated, though not overly so. Megaways rule the reels though not as prominently as they do in regular games to use the engine. Every spin displays two to five symbols on each reel, the number is randomised. To win, players need matching symbols left to right on at least three reels to make a combo, triggering the Infinity Reels mechanic in the process. Twelve symbols are used throughout Tiki. Ten are regular pay tiles made up of 9-A royals and four Tiki masks, the top two worth 1x the bet. Wilds help pull in wins by substituting for anything except the volcano scatter.

When you break it down there aren’t a whole lot of features in Tiki Infinity Reels Megaways. Yet they all work together to get pretty frantic at times. First is the Infinity Reel system itself, which includes a jackpot, a symbol multiplier, while free spins are incorporated when triggered.

All spins begin with 3 reels. Whenever the rightmost reel improves a symbol combination, another reel is added to the grid. If symbols on the new reel improve the combo, the process repeats, until no new helpful symbols appear – with no set limit. Should reels reach 12 or more, then an additional 888 times the bet jackpot is added to the current win.

As well as expanding reels, a win multiplier is also used. It starts at x1 and increases by 1 whenever a new reel is added. Whenever the grid resets to its default 3-reel setting, so does the multiplier.

Landing a win with the volcano symbol awards 10 free spins, altering a few of the rules. For one, the symbol multiplier is not reset between free spins so it can only remain static or grow. Free spins aren’t necessarily static, though. Every 2 new reels added in a sequence awards 1 free spin, while any volcano symbol win adds 4 free spins.

There’s a big difference between dodging Odin’s lightning bolts in Midgard to lounging on a Pacific island sipping coconut water while gently lapping waves send you off to sleep. You feel it right away. Odin Infinity Reels had an immediacy to it, brought about primarily by its stunning looks. Never mind the ridiculous numbers it produced; it was the fantastic treatment of the theme that made you sit up and take notice. Tiki Infinity Reels Megaways doesn’t make the same first impression. It is nice, and you can see a progression since ReelPlay’s first Infinity Reels slots, graphically, but it doesn’t slap you the way Odin did.

Yet, you don’t really want gods swinging hammers at mortals while you’re relaxing on the beach. Tiki Infinity Reels Megaways aims for a different audience, going for a lighter atmosphere and pulls it off quite well. The look is more refined than earlier releases, not to mention the licensed slots such as Crystal Wolf. The animations are super smooth, matching the island groove. Altogether ReelPlay presents a pleasant environment to build reels and crack the 10,000x top prize in. As mentioned, this is half of Odin’s, making Tiki feel better suited to a less demanding players all around.

Building a pleasant game environment is a crucial part of Infinity Reels at this point too. As commented in the past, the Infinity Reels mechanic, while being a good one, has limitations that become more apparent on each release. There is only so much it seems capable of doing (unless future releases can prove us wrong), so the full package has to be a good one to justify a new release.

So is Tiki Infinity Reels Megaways up to the task? For the most part, yes, it’s an enjoyable island adventure that looks, sounds, and plays well. The inclusion of the x888 jackpot adds a sense of mission, and the mechanic works as well here as anywhere else. It doesn’t push the Infinity Reels envelope, adding to the concern we have seen all it can do. Then again, it’s hard to be too critical about a system which is a little different than most. It certainly doesn’t stop the game being an enjoyable one, just don’t expect Tiki to redefine how we perceive Infinity Reels.

Tiki Infinity Reels Megaways doesn’t stretch what the mechanic has done in the past and is a less potent version of its predecessor, but it is still a highly playable game. 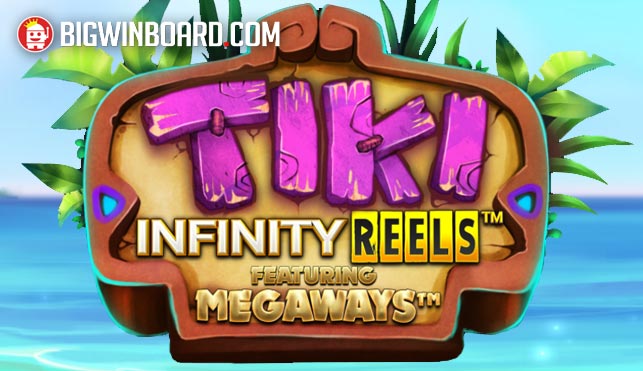