TNT Tumble is yet another grid slot in Relax Gaming’s Tumble series to come rolling off the production line. It uses a mining theme to incorporate a bunch of clever features, symbols, and gameplay. It’s not without precedence and shares several aspects with previous Relax Gaming grid slots - Temple Tumble Megaways in particular. Both offer bonus games with three options that affect the volatility, for example. Despite the similarities, TNT Tumble has a marvelous bonus round and ultimately does more than enough to shrug off its predecessors and stand on its own feet.

For starters, the setting is a pleasant one. TNT depicts a mine shaft built in an alpine location somewhere like Switzerland, or Austria. The brick and iron mine gives way to a long sweeping meadow, surrounded by snow-capped mountains. It must be spring or summer because the flowers are blooming and you can practically feel the warm mountain breeze. When you are done admiring the scenery, hit the triple coin button to select stakes which can be had from 10 c/p to £/€100 per spin.

On each spin, symbols and stone blocks tumble into the 5x7 grid. Initially, only 4 rows contain symbols while the bottom 3 rows are made up of stone block blockers which can be removed if a winning combination lands next to one. When a winning combo lands, the symbols involved are destroyed to let new ones fall into place, as are any adjacent stone tiles. This process continues until to more winners land, then a fresh tumble begins.

The symbols aren’t the most exciting you’ll come across, but they do the job. In ascending order are a silver nugget, a gold nugget, blue gem, green gem, orange gem, and a red gem - the latter being the most lucrative one giving you 15 times your stake for a combination of seven. You'll need at least 3 matching symbols to connect either horizontally or vertically to form a winning combination.

Helping out is the wild drill symbol. It’s not a drill for nothing either because when wilds are used in a win, they are not removed, but burrow down into stone tiles. Drills can stack up with 7 being worth 50 times your total stake. When wilds reach the bottom of the grid, only then are they removed. It might not sound like it on paper, but the wilds are extremely useful and play a huge role in a significant proportion of the wins you receive. Getting a bunch of them drilling holes all over the grid can be an exciting moment indeed.

Boring down into the workings of the game we find a solid RTP of 96.11%. Interestingly, with the bonus buy engaged, the RTP stays at the same level instead of rising as you might normally expect to see. In any case, it’s not a bad stat at all and is complemented by a relatively high hit rate and volatility that players can choose when the bonus round is triggered - medium, high, or very high.

The base game has the odd moment but things can get manic during the Bonus game which comes into play when all 3 rows of stone blocks are blasted away on one spin. The bonus game comes with 6 free spins initially, and like Temple Tumble, there are three options for players to choose from:

Multipliers and extra spins are trapped in special stone blocks on the grid. When the blocks are destroyed the extra spins block awards 1, 2, 3, 5, or 10 free spins, while the multiplier block adds x1, x2, or x3 to the bonus game progressive multiplier. Keep blasting those stone blocks, because stones removed are not reset between spins and clearing three rows awards +2 free spins.

There is one more special symbol to keep in mind. This is the dynamite stone block that appears during the bonus and base games. When this one is removed, it explodes to demolish all other stone blocks in its row.

If you aren’t in the mood to chip away at stones during the base game, then there is a Bonus Buy feature to take advantage of for a cost of 70 times your total stake.

There is no denying that TNT Tumble shares elements with other Relax Gaming grid slots. Temple Tumble Megaways is perhaps the most closely aligned. The three bonus game options are the same conceptually, and yet when TNT is doing its thing it really doesn’t matter. The star of the show is the drilling wild - that thing can go nuts racking up win lines, busting stone tiles, linking up with more drills, and generally causing all types of mayhem.

These grid slots typically work best amid busy chain reactions of wins and features and the drill is the central figure in most, if not all, of these moments. It’s worth a crack just to see it in action; it’s quite a sight.

All up, TNT Tumble might not look so from a screenshot, but it’s a really fun grid slot from Relax Gaming. The base game can drag at times, but any boredom is quickly eclipsed by a fantastic bonus game that gets on some blistering runs. Factor in a simulated max win of 12,278 times the stake (2,088x max payout in a single spin) and you’ve got the recipe for some dynamite grid slot action.

For even bigger max win potential we recommend checking out Relax Gaming's pixelated video game inspired Hellcatraz slot which has the capacity to dish out wins of over 50,000 times your total stake. 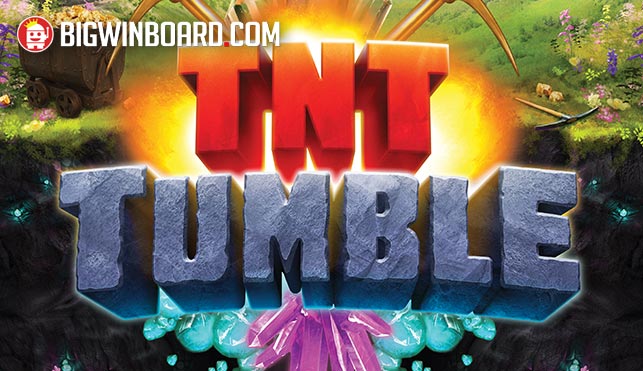