Developer Pragmatic Play is no stranger to the spookier side of life, having released slots based on zombies in Wild Walker, ghosts in Mysterious, and skeletons in Cowboys Gold. On the whole, when the studio explores darker subject matter, they generally do it quite well. Now the team turns to one of the most exotic ways to scare players, the mysterious practice of Voodoo. The resulting slot, Voodoo Magic, has some nice cosmetics, yet is let down by its potential, despite having more features than a voodoo doll has pins.

Voodoo might have originated in Africa, then flourished in the Caribbean, but it’s New Orleans Voodoo that usually finds its way onto TV, in books or theming games. This form blended traditional Voodoo with Catholicism, ending up in Louisiana after many Haitians fled there following a slave revolt in 1791. What we get now is that dank, swampy, paganistic, a little scary, a little sexy version, which Pragmatic Play has recreated quite well in their game.

In Voodoo Magic we find a 5-reel, 40-payline grid mids a Mambo’s hut (voodoo priestess), as she stands to one side brewing magic in a green misted cauldron. Littered about the place are things like snakes in jars, eyeballs, and dolls. A sultry tune saunters away amongst crickets and sounds of the night, shifting to full-on New Orleans Mardi Gras during the bonus games. The music is pretty good, as are the visuals, so it’s a shame the rest of the game doesn’t reach the same standard.

Voodoo Magic is available on any device, where stakes from 20 p/c to £/€100 per spin may be set. Mathematically, the game shows promise for those who appreciate highly volatile gaming. To be precise, Pragmatic Play has rated volatility 4.5 out of 5, which feels severely out of odds with the low potential. Pragmatic Play makes use of flexible RTP, so the numbers may vary depending on where you play. The default value, however, is 96.50% which is quite high.

Getting a win occurs when three to five matching symbols land along one of the paylines. Ten regular pay symbols appear on the reels, consisting of 9-A royals, and four picture symbols – goat skulls, grinning skulls, alligators, and a lady who appears to be in a trance. Picture symbols are worth payouts of 3.75 to 10 times your stake when they land in combinations of five. The wild is worth a little more at 12.5x for five, while also substituting for all symbols except the bonus.

Voodoo Magic is equipped with a significant number of features, though the three bonus games are more or less similar. As well as free spins, players benefit from 2 random spin features, and a bonus buy.

Random features are triggered when two scatter symbols hit on reels 2 and 3, thus failing to trigger the bonus. When so happens, 2 potion bottles hover over the screen for players to click one to receive their modifier. One is Mystery Curses, where a random number of wilds are added to the reels for a win evaluation. The other is Fortune Hex which removes all low-value symbols and scatter symbols until only high pays are present.

Players gain access to the free spins round by either buying it for 80 times the stake, or by hitting all 3 bonus symbols on the middle three reels. Here, mystery symbols may be added to the reels which turn into any matching pay symbol. Moreover, the voodoo priestess may also use her magic to randomly transform these symbols. Before the round starts, however, three cards are presented on screen, revealing one of the free spins games once clicked:

All bonus games award 5 free spins and cannot be retriggered – unless the 25x win guarantee is not met. In that case, 5 more free spins are awarded. This process repeats until the minimum win is reached.

It’s rare to play a game which triggers a win guarantee so often during bonus games. Sure, it’s nice to have a fail-safe mechanism, but you shouldn’t have to rely on it this much, especially in Voodoo Free Spins where the guarantee is 10 times the bet. For example, the first time the bonus triggered, Super Free Spins were awarded. Four win guarantee triggers later, and we were still slogging through boggy mangroves. Eventually, a couple of hits pushed us over the x25 threshold, and we were able to run for our lives. Bonus games shouldn’t feel like such a drag. Usually, you want them to last as long as possible, not feel so crushed.

This moves us to the next point, and the game’s major drawback which is its low potential. Players have questioned whether the max wins in some Pragmatic slots are a little over-optimistic. Voodoo Magic, on the other hand, comes with the surprisingly modest figure of 1,000x the bet. This is actually the cap, so if you hit 1,000x in free spins, the game terminates. Another issue is the measly number of free spins you get when won, or paid for. Quite a lot of mystery symbols are added to the reels, yet five still feels a bit low. They can’t even be retriggered unless, of course, you fail to hit the win guarantee that is and win a few more.

Despite being a highly volatile game, Voodoo Magic probably has the goods to entertain a casual crowd looking for a walk on the wild side. It looks nice; the soundtrack is cool, so the overall vibe is fun. There are plenty of features to keep players busy, but the regular spin wins and overall potential is disappointing. If you’re after more than a pretty picture, there’s a good chance you’ll end up as glazy eyed bored as the voodoo lady on the side of the screen.

Voodoo Magic is a nicely atmospheric, feature-rich slot, brought to its knees by its weak payouts. 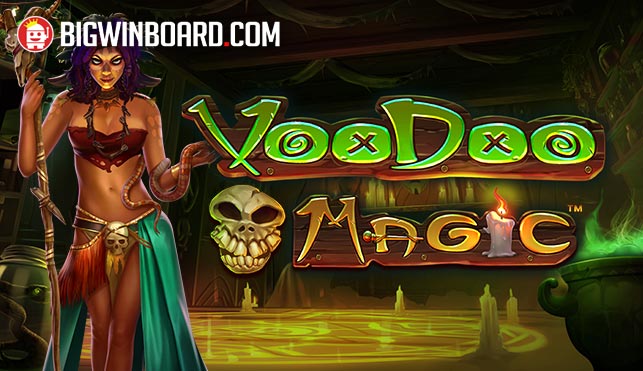