If we were to summarise the first half of 2019 for Yggdrasil Gaming, the word that comes to mind is disappointment. Aside from Cazino Cosmos, most titles have been mediocre at best and have been met by a rather lukewarm response from both us and, judging by the lack of praise, the gambling community as a whole. What is even more worrisome is that the company has decided to follow Microgaming's example by partnering up with lesser known studios to do some of the work for them. Seeing how terrible it has worked out for Microgaming, we can only hope that Yggdrasil will set the bar higher. Sadly, due to the fierce competition in the market where a growing number of developers are fighting for your attention, providers seem almost obliged to engage in a quantity-over-quality race.

In Yggdrasil's latest offering we've been allowed inside the Wild Robo Factory where 12 mechanical servants are forced to slave under the command of the evil robots. Playable from as little as 5 cents up to 125€ per spin, this medium variance offering comes with a setup of 5 reels, 4 rows and 25 paylines. It's also packed to the brim with features with several different types of wilds on offer as well as Respins. In the Free Spins game, you're taken down to the dark basement where you'll see the System Overload feature and transforming symbols come into play.

As is nearly always the case with Yggdrasil, the visual design is excellent and sufficiently intriguing to pull you in. Set inside a steamy factory with a futuristic video game soundtrack playing, symbols on the reels include card suit symbols as well as 4 different robotic parts. The most rewarding out of the regular symbols is the robot cyclops which gives you 15 times your stake for 5 of a kind. The yellow robot is the wild and comes in many different shapes and sizes. These include regular wilds, multi-reel wilds that can appear 2 reels wide, pattern wilds and x2 multiplier Robo Wilds. Robo Wild symbols do not appear on the actual reels. Instead, you'll see them roll past on the conveyor belt just beneath the reel set, overlapping the symbols on the reels.

The Wild Robo Factory is a busy place - here's a rundown of all the features. First of all, there is the Symbol Transformation feature. When randomly activated, all instances of one low-paying symbol can be upgraded into its corresponding high-value symbol. For example, blue low-value symbols would transform into blue premium symbols.

Next, there is the Robo Respin feature which is also randomly triggered - a Robo Wild is placed beneath reels 3, 4 or 5 and will move one position to the left on each spin. The Respins continue as long as there is an active Robo on the conveyor belt.

Finally, there is the Robo Free Spins feature. It comes into play when you land 3, 4 or 5 Free Spin Robo symbols anywhere in view, giving you 5, 10 or 15 spins respectively. The Free Spin Robo can also fly onto any row on the reels and move with the conveyor belt by one position left on each spin to further increase your chances of triggering the Free Spins.

Now, instead of actual free spins, you'll benefit from Robos being placed on the belt 1 to 3 positions apart. Just like in the main game, the wild robots will come in from the right and move one position to the left on each spin. When a robo has passed the leftmost reel (reel 1), it will count as one spin having been played. Not only that, the Symbol Transformation feature applies here as well along with a feature known as the System Overload feature. When the latter is initiated, the conveyor belt will reverse, moving all Robos backwards 1 to 9 positions. This, of course, results in additional free spins. The feature, which can yield a max win of around 3000 times your stake, finally comes to an end when all Robos have passed the leftmost reel.

Though a lot less complicated in action than in writing, we can't help but feel that Wild Robo Factory is a bit of a mess. As the saying goes, less is more, though in this particular case, more appears to be less. While the features trigger frequently with robos coming from all directions (at times you don't even know what the heck is going on), the payouts are usually so nonsensical that you'll eventually start to lose interest in them.

Recreational players will probably find themselves smitten by the charming robots, but hard-core punters will see through all the bell and whistles. Furthermore, as the RTP has to be distributed across several features, don't expect any single massive hits here. Instead, it's more about accumulating wins in the bonus with the help of the wilds (you won't hit very big in the main game despite all the features on offer). Another thing we're not great fans of is the 5x4, 25-payline combination as we feel the extended format is better suited for win all ways slots.

If we have to mention something positive about Wild Robo Factory, it's the charming background story, outstanding visuals and the Egg-O-Matic inspired game engine delivering all the cool robots. We might give it a spin or two once it goes live, then hop on the conveyor belt and hope for it to take us to a better place.

Wild Robo Factory is charming, pleasing to the eye, and solidly built, but it won’t keep you coming back. 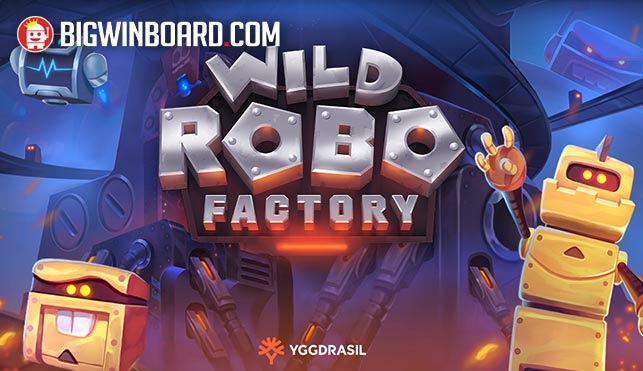