Developer Relax Gaming engages in a bit of entendre in their musically based slot Amped. Not only does it refer to the amplifier in a stereo system, it also takes advantage of the hip use of the word to ‘get excited’. It’s quite a hip game all round, riding the neon retro fad that’s popular in iGaming. Amped offers several popular features as well, four of them to power four different kinds of free spins rounds. The action occurs on a 5x4, 30-payline grid surrounded by equaliser effects and cascading lights, while four boxes sit to the right denoting the different free spin bonuses. The boxes don’t really do much other than add some colour. A bit of techno rises and falls while you play, which you wouldn’t call amping as such, but it accompanies the reel action pretty well.

Players can throw shapes on any device, setting bets from 10 p/c to £/€100 per spin. Amped doesn’t appear geared towards the hardcore raver type, so don’t expect high volatility. A lower, medium+ setting makes it a better fit for casual groovers to enjoy. RTP appeal will be wider, however, due to an above-average rating of 96.37%. Features were frequent too, if not hugely rewarding most of the time. They certainly triggered often enough to stay engaged throughout testing, if not blowing much away by what occurred on screen.

Winning combinations are made of three to five matching symbols left to right on a payline. All symbols are bright, simply designed icons that suit the theme. Four low pays start the table off, made up of diamonds in orange, green, blue, and red. Next are the high pays consisting of mics, cassette tapes, speakers, and a shoulder breaking ghetto blaster. Landing five premiums on payline pays out a reward of 4.5 to 15 times the stake. The pink disc wild is worth the same as the top premium when they line up on a payline. Usually, it is used to substitute for any of the pay symbols to help complete a win.

When spinning Amped, players get Scatter Wild Respins to add intrigue to the base game while waiting for one of four free spin games to come around. First thing to know is there are 4 variously coloured scatters, each corresponding to a different feature. Not only are they scatters, they are also wilds, worth the same amount as the top premium, whilst also substituting for any pay symbol as normal.

To trigger free spins you’ll need 3 or more of the same scatter wild type in view on the board. Whatever feature you win, they all start with seven free spins and one of these modifiers active throughout:

None of the bonus games can be retriggered, but whenever a scatter symbol lands, each one adds +1 free spin to the total.

There’s a bit of Pragmatic Play’s Dance Party happening when the game gets going, mainly due to the DJ based music and all the bright lighting. Amped is more minimalist, looking like it is set inside an amplifier rather than on a heaving dance floor. This might be a bit of a stretch, yet the background image sort of brings up the art of Alex Grey - in a majorly stripped back, wannabe sketchbook type way. While aesthetically ok, it comes across as somewhat gerneric and the theme hasn’t been expanded on much, nor the math model, making Amped middle of the road type gaming rather than a hedonistic free for all.

Like the low key trance soundtrack, Amped’s gameplay doesn’t exactly get you hugely amping either. If it were a Saturday night, it would be a chilled one at home with a playlist rather than a massive club event. No doubt this is Relax Gaming’s angle here though. Amped is unlikely to get too much hype or accolades, as if the team needed something to play around with, in between working on the studio’s potential hits.

This lack of major investment shows, but it doesn’t mean playing Amped is a negative experience. Just don’t expect it to hold much interest once you’ve seen the four bonuses do their thing. For the record - Big Bass Sticky Wild Free Spins turned out to offer the best results during testing. Something magical happens if you can accrue a bunch of sticky wilds in strategic places on the grid to produce tidy wins spin after spin. The other bonuses weren’t quite so exciting, though synced reels could be fun when the right symbols were in sync with each other.

All together, Amped is an ok game for those after a benign EDM experience. Relax could have easily pushed things harder if they’d had the desire. Then again, there is a time and place for everything, including ravers who prefer to bop quietly in their safe zone rather than get shirtless and manic.

Amped’s gameplay creates a fairly enjoyable groove, but its lighter nature and somewhat generic looks makes it better suited to warming for up a headline act. 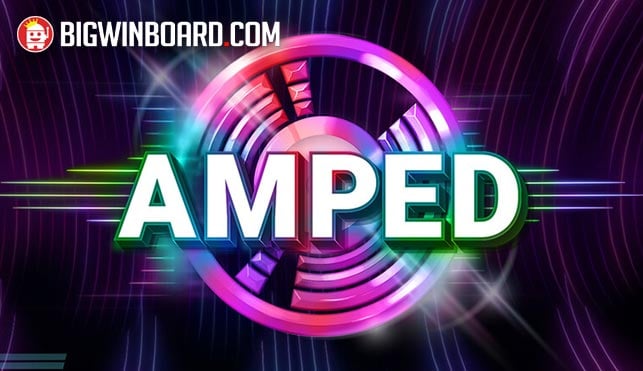