You can't blame Play'n GO for trying to come up with ideas for fresh new themes after you've had a look at Banana Rock, a video slot with a title that reflects the playful attitude of the storyline if you will. Nevertheless, this is a high variance gambling machine and no monkey business.

Visually, it's got a retro 80s neon thing going on with bright colours and characters made up of a rock band of monkeys. Fundamentally, however, it's easily identifiable as a Play'n GO slot with the distinctive control panel and an overall familiar Play'n GO characteristic to it.

Regarding setup, there's nothing out of the ordinary here. The game is delivered with 5 reels, 3 rows, 10 fixed paylines and accepts bets between €0.10 and €100. The action is high variance, although not the highest ever released by the company who grades it 8 out of 10 on the volatility scale. It's not a complicated slot thankfully (we got quite exhausted having recently reviewed both Baron Samedi and Nitro Circus) and the features included are simple and straightforward as you will see.

In terms of RTP, most if not all, accredited casinos listed on our best casino bonus page use the default setting of 96.60% which is the highest, but off-shore casinos and specific markets may use settings as low as 84.58% so be observant.

Symbols on the reels include luminous style A, K, Q and J royals as well as the 5 members of this anthropoid rock band; a percussionist, a bass player, a keyboardist, a drummer and the top paying symbol -a guitarist who will give you 40 times the stake should you land 5 across a full payline.

The wild is of the same value as the top symbol and comes in the form of a golden disc while the Banana Rock logo represents the scatter.

To balance the game a bit and make it more entertaining, a respin feature has been added to the main game. Land 2 or more Rock 'N' Rollin' wild symbols, which can appear on all 5 reels, and the respin feature is triggered. When activated, the triggering symbols are held in place as the respin takes place.

As the reels are spinning, the rightmost wild symbol will move across the reels towards the leftmost wild symbol, connecting with the other wilds on the way (moving vertically and then horizontally between them), leaving a trail of wilds over the non-wild symbols in its path, to help create winning combinations and the potential for a wild line.

Landing two scatters reels 1 and 5 triggers the free spins feature that includes a guaranteed win in the Encore Spin that takes places after the Free spins conclude. The free spin feature begins with 10 Free Spins. Each scatter that lands during the bonus adds 1 additional Free Spin.

According to the fact sheet, Banana Rock is capped at a max win of €250,000 (max bet) and 2500 times the stake which can be achieved with the help of the 25x multiplier during the Encore Spin.

Banana Rock comes with outstanding visuals, a fun theme and great potential to go along with a thrilling free spins feature that we're sure will appeal to a lot of players. With that said, it's not a revolutionary slot in any way and it doesn't really break new grounds, although still a refreshing groovy new slot by Play'n GO with a bit of a twist to it.

Stop monkeying around and get in the groove with Banana Rock. 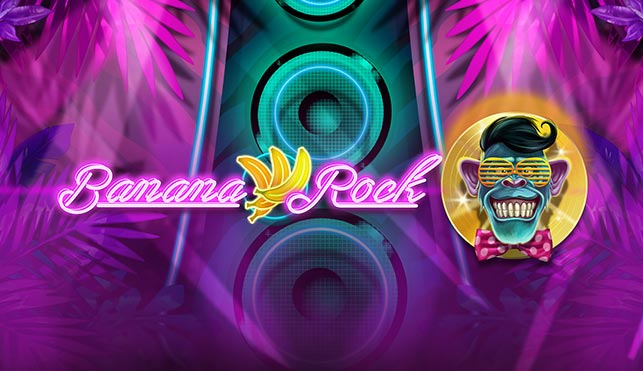