Demo play is not available in your region. Please visit one of the casinos listed below for free play.
Blueprint Gaming

✅ Play Crypt of the Dead on

Crypt of the Dead: Slot Overview

If there's one thing Blueprint Gaming has a tendency for, it's taking a design and tinkering the living daylights out of it. Witness the multitude of variations of games like Deal or No Deal or their 'Eye of' range for two examples. The thinking seems to be if something already works, perhaps it would work even better if 'X' was tweaked. Players benefit from endless variety, and an occasional nugget of gold emerges from the studio.

This brings us to Crypt of the Dead, another in a long lineup of 'book of' style slots that began many moons ago, showing no signs of abating. It seems the only requisite for justifying a new book slot is it has some sort of twist, be that features-wise or thematically. Of the latter, Crypt of the Dead is solidly Egyptian, played out in a crypt in which an eerie green light permeates, illuminating a couple of cat statues and hieroglyph adorned pillars. Dominating the centre of the chamber is something you don't see in a book game often, if ever – a game grid made up of 6 reels and 4 rows. Even more intriguing, the math wizards at Blueprint have worked out how to incorporate a pay system providing 4,096 ways to win. A far cry from the 10 fixed payline deal you usually find in these games.

Naturally, there is a trade-off if you have so many ways to win at your disposal, and as you probably suspect, symbol values have taken a hit. Here, 11 symbols in total grace the reels, 10 of them being regular pay symbols, the other one is a dual wild/scatter tile. On the low side of things, we find 9-A card royals, covered in little Egyptian icons, followed by Horus, Anubis, a Pharaoh, and of course, the Indiana Jones explorer wannabe symbol with a floppy hat. As to values, a full six-of-a-kind win made up of picture premiums is worth a payout of 1.5 to 10 times the stake. It doesn't sound like much compared to other book games, but expanding symbols on all those ways rack up.

Any device is fine for exploring the ominously titled Crypt of the Dead, where stakes of 10 p/c to £/€5 may be set. Highly volatile, RTP comes in two forms –one a default value of 95.49%, the other 96% when activating the bonus buy. As well as the buy feature is expanding special symbols in free spins, which are synonymous with this style of play.

Crypt of the Dead: Slot Features

Instead of a book symbol, we find a tomb/logo which plays the part of wild and scatter. This symbol lands on any reel, and as the wild, it replaces all other symbols to help complete winning combinations. As the scatter, 3, 4, 5, or 6 in view award 10, 15, 25, or 50 free spins. Scatters remain on the reels during free spins, so they can be retriggered when 3 or more land to extend the show.

Before free spins begin, one of the pay symbols is randomly selected to be the special expanding symbol. This special symbol appears on any reel with a special golden background. When a spin has stopped, and after any regular wins have been awarded, if the special symbols can form a win, they expand to cover all positions on their respective reels. These full reel symbols pay all ways, from any position, and do not need to be next to each other to do so.

The chance of landing lucrative full-screen wins is boosted during free spins due to the expanding symbols, so players, after a shortcut, may be able to do so using the Bonus Bet feature. Where these sorts of extras are permissible, a payment of 100x the bet guarantees a minimum of 3 scatters on the next spin, triggering the feature. It's possible to score a win from the triggering spin as well, getting the bonus off to a decent start.

Crypt of the Dead: Slot Verdict

For such a large increase in reels, rows, and pay-ways, the change doesn’t come across as drastic for much of the time. The base game, for instance, is more or less the same sort of experience as it usually is, meaning wiling away the time, waiting for free spins to hit. We're not trying to take anything away from Crypt of the Dead, by the way. It looks decent, runs smoothly, and the novelty factor is there from the moment all 6 reels first start to spin. However, in the beginning, Crypt of the Dead also looks like fifty other book games, so its new capabilities aren't glaringly obvious at first glance.

The perception changed during free spins. Until then, Crypt of the Dead felt like it was holding back, biding its time before it got the chance to unleash in the bonus. Here is where all those extra win ways flex via expanding special symbols. For a lot of the time, the financial differences aren't hugely noticeable when three of four special symbols land. Beyond that number, the numbers stack up exponentially. At around 3,000x, five of the explorers, for example, are worth less than five are in games like Book of Dead. However, land a line of six, and you're looking at a payout of 40,960 times the stake - far beyond most games in this category. That one spin alone is enough to threaten Blueprint Gaming's standard win cap of 50,000x, or £250,000, whichever hits first.

Crypt of the Dead’s considerably expanded grid might not come across as a game-changer at lower levels but it can go crazy when wound up at later stages. The game is definitely one for Ra fans to have a crack or anyone intrigued by what expanding symbols can do with more room to operate.

Crypt of the Dead’s considerably expanded grid might not come across as a game-changer at lower levels but it can go crazy when wound up at later stages. 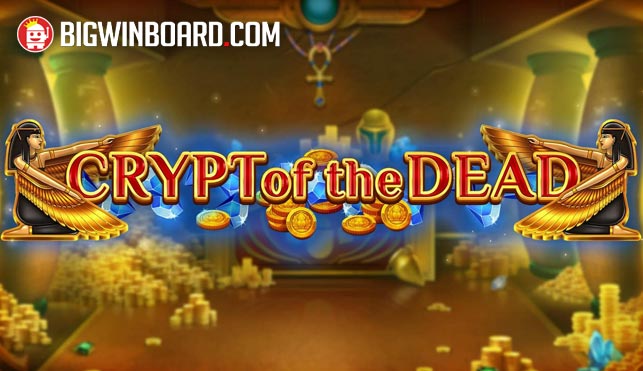