Overall, Desperados Wild Megaways is a rather standard Megaways offering, but there's one add-on that saves it from mediocrity.

Close to 4,000 casino games
Not open to Swedish players

Inspired is the latest developer to have a crack with the mighty Megaways engine on license from Big Time Gaming. Some developers go wild and crazy with their debut Megaways slot the way Fantasma did with Flower Fortunes for example, but most like to play it safe. The team at Inspired have taken the executive decision to go for the second option and paired it with a Wild West theme while also having taken some inspiration from Relax Gaming's successful Money Train slot.

Desperados Wild Megaways won’t bowl you over when it first loads. There is no mystery like there was with a game like Tombstone with its unusual reel and row set up. Desperados Wild is classic Megaways creation with 6 rows in the main game area, along with an extra horizontal row across the top. The game does look quite good although it comes with a rather standard Western scene backdrop made up of cliffs, canyons, and windswept desert. Music and sounds are straight from the Western soundtrack too. Explosions, gunshots, and whip cracks punctuate some guy on a porch plucking away on a six-string. If you are not a Western buff at this point, you won’t exactly be chomping at the bit to get stuck in. But some of the most intense westerns are set in sleepy little towns so let’s give it a whirl.

Firing up this bad boy, step one is selecting an appropriate bet with choices that vary from 20 p/c to £/€20 per spin. Inspired has pushed Megaways to the limit, so we get the full 117,649 ways to win. It also means that cascade wins are on the cards. This is where winning symbol combinations are removed to let new ones tumble in, and chain multiple wins together from one spin. Desperados who prefer a rougher ride will have to accept a medium variance mathematical design which means plenty of low to medium wins in the main game and many spins to go until you trigger the bonus. Due to the ability of gambling free spins and feature buys, the RTP ranges from 95.21% - 96.49% which is fine.

Symbols are what you would expect from the theme. Card royals always make more sense during these sorts of games, and we get 9 – A symbols here in that Western font. Moving up the paytable are 3 cowboy symbols – a bottle of whisky, pistols, and some dynamite. The most valuable regular symbol is the Sherriff badge which is worth 50 times the stake for six of a kind. There are also four Badass looking hombres on wanted posters representing the wilds (looks very much like something from Red Dead Redemption 2, doesn't it?) and which can substitute for regular pay symbols. During the base game and Sunset Spins, they only show up on the 1x4 reel. During Jail House Free Spins wilds only turn up on reels 2 - 5.

There isn’t a lot happening during the base game, so the game relies heavily on its features which revolve around free spins. There are two types which are triggered when 4 or more scatters land. Each additional scatter in view adds 2 more spins to the total. A money train literally rolls into town, and the player can choose to play Sunset Spins or Jail House Spins.

Sunset Spins is your typical Megaways bonus and come with at least 8 free spins to start with. Scatters continue to appear on the bonus reel and 3 or 4 of them award an additional 5 or 10 free spins. Sunset Spins comes with a multiplier that starts at x1 and increases by +1 with each cascade win. There is no technical limit to how high this multiplier can go.

The Jail House free spins come with a warning, or invitation, about how highly volatile they are. Players get at least 12 free spins to start this round with. Any wilds that land (they only appear on reels 2 - 5) fall to the bottom of their reel and remain stuck for the feature. More wilds that land on that reel also become sticky while at the same time also adding a x1 multiplier to that reel. If a reel is covered in stacked wilds, it awards 5 more free spins.

Some versions of Desperados Wild come with a couple of feature-related extras. The first is a Gamble feature that can be played before the bonus round begins to win more free spins. The second is a Bonus Top Up that lets players risk their bonus entry for a chance to win a cash prize or an upgraded bonus. In some cases, players may be able to buy the Bonus Top Up or buy the feature outright as well.

Desperados Wild Megaways is definitely not a bad game, but for most part there is little here to get too excited about. The base game plays and feels a lot like Bonanza which means loads of smallish to medium wins and a long distance to travel before the bonus is triggered. That part is not very exciting at all. What stands out here are the Jail House free spins with the sticky wilds that also build multipliers. It's simply outstanding and possibly one of the best Megaways bonus games we've seen all year. In a sense, this is Dead or Alive Megaways before there actually ever was one.

There's no info on the max win here, but expect to see some decent hits in the casino community once it goes live. There's a win cap of £250,000, so there are clearly larger wins to be had if you strike it in the right mood. Generally speaking, Desperados Wild Megaways is a rather standard Megaways slot. However, it's the Jail House free spin feature alone that saves this game from mediocrity and turns it into a barrel of explosive gunpowder. 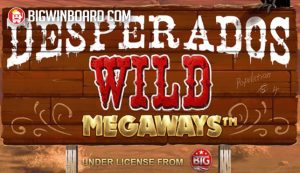 Do the multipliers multiply each other? The game looks really cool

Yes they do! The sticky wild bonus is insanely fun.