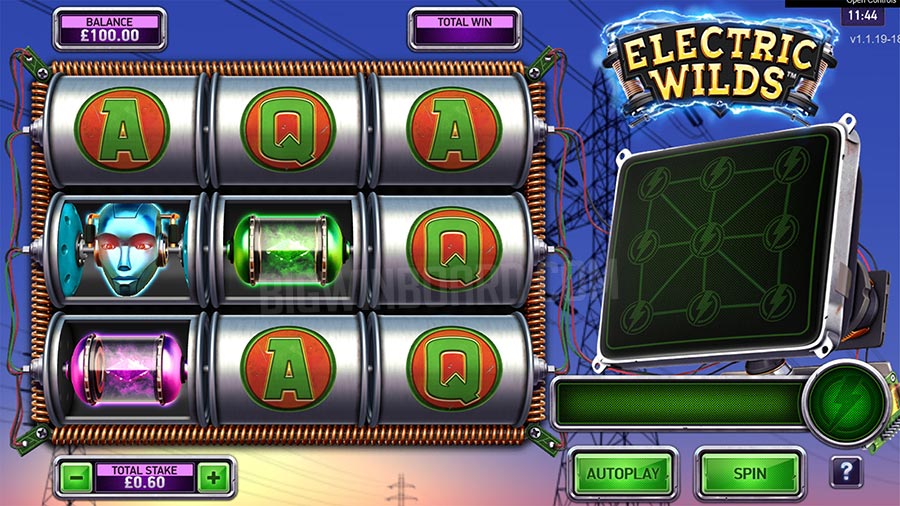 Independent developer Northernlights is the team behind the electrifying slot Electric Wilds. Known to craft games for different studios such as Yggdrasil Gaming and SG Digital, Electric Wilds is the result of a collaboration with Relax Gaming that is to be powered by their Silver Bullet platform.

The word electrifying is usually a positive thing, but on its own, it doesn't mean much since so much depends on the context. On the one hand, the word is used to describe something adrenaline-filled that gets the blood surging, on the other hand, it can be quite a shocking experience. So which situation applies to Electric Wilds?

Power lines make up the background to Electric Wilds while a 3 by 3 reel set covers most of the screen along with a green-lit display called The Matrix. No, not the life-like simulator helping power robot tech. The Matrix is more of a wild making machine; we'll get to it.

Playable from 10 p/c to €/£ 30 per spin across all devices, Northernlights describes the mechanic as '9 individual reels with multiple in-game cameras'. Not quite sure what that last part means, but basically, players get 3 columns, 3 rows, and 5 paylines on which to land winners. Only three of a kinds are possible of course, starting with low pay J-A royals which look like Andy Warhol can art. The Futuristically styled high pays, meanwhile, consist of three coloured power capsules and a glowing-eyed robot head. The cyborg is worth the most from the bunch at 20 times the stake.

So far, pretty standard stuff, but the numbers start to offer more clues as to whether the game is worth picking up or not. First is a stat everyone can get behind, RTP, which clocks in at 96.17%. The low volatility, rated 2 out of 5, is sure to be a bit more divisive, but it's the hit rate that leads to some odd gaming sessions.

Strangely, the hit frequency during the base game is just 1 in 17, which is probably a lot lower than most players are accustomed to. Then again, the low number does indicate that the game may have more in common with the classic fruit slot than other genres. In any case, almost as rare is the Lightning Overprints feature, hitting 1 in 20 spins on average - which doesn't quite succeed in making up for the hit rate shortfall. Let's take a look at exactly what the features entail.

In keeping with the 'old UK pub mechanic' there are just two features to cover. The Lightning Overprints feature is where the Matrix comes into play. One any spin, little lightning bolt symbols may appear in the bottom right-hand side of the regular symbols. When an overprint appears like this, the corresponding position on the Matrix display is lit up.

Every line of 3 bolts, vertically, horizontally, or diagonally, on the Matrix causes one symbol type on the grid to turn wild. Multiple lines mean multiple symbols turn wild. Lights on the Matrix generally clear on the next spin, but there is a chance some lights stay lit for the next spin. There is also a chance super lightning symbols appear on a spin. These look identical to the normal one, but they light up a random number of spots on the Matrix rather than just one.

Should players manage to fill the grid with the same symbol, via wilds or just one symbol type, they trigger the Repeater bonus. The screen shifts to one covered in flashing lightning and 5 tubes - 1 broken, 4 operational. Hitting the start button causes electricity to move along the tubes before stopping at one.

Finally, a free spins game has been included as well. Strangely, there was no mention of it anywhere, neither in the game sheet or the rules section of the paytable. Since it turned out to be more or less identical to the base game, we never bothered to investigate it any further.

Unless you are absolutely mad for electricity, Electric Wilds is a tough one to warm to. Northernlights is a studio that has its share of hits and misses; sadly, Electric Wilds is one of the latter. Its main problem is that it isn't much fun to play. Low hit rate combined with a low volatility makes for some painful gaming. Most of the time, there simply isn't a lot going on and it quickly kills the spirit.

The Matrix teases from time to time, but again, usually, fudge all happens. Occasionally, you'll get a few lines and wild substitutes, but not enough to save the day - it just shouldn't feel like such a triumph to get any old organic win.

The game's tagline is 'Shockingly good wins.' Except not so much when you do the maths. For one, a full grid of the cyborg symbol is worth 100x, so you'll need to enter the Repeater bonus with that and win it 4 consecutive times to hit the game's 500 times the stake max potential.

If you travel by train, and enjoy staring at power lines running alongside the track (and no one is judging), then Electric Wilds could very well be the game for you. Otherwise, it's hard to think of much else to commend it. Northernlights has come up with a twist on the 3x3 format, and kudos for trying something new. To be fair, it is curious initially. The problem is once you've seen the Matrix feature dish up a few wilds once or twice, there is a steep drop off in interest.

Harnessing the raw power of electricity completely revolutionised the way humans lived; it’s a shame a few more electrons of that power couldn’t have passed on to Electric Wilds. 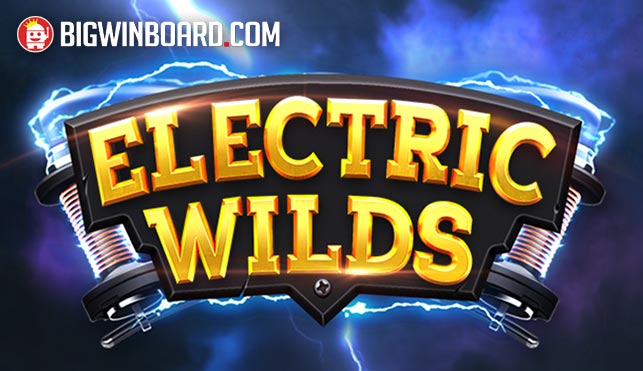