✅ Play Gods of Olympus Megaways on

Editor's Note: possibly due to trademark infringement issues, the game has subsequently been renamed to Gods of Olympia.

With a title like Gods of Olympus Megaways, you already know you're going to be in for a treat. After all, it's Blueprint Gaming we're speaking of, a provider that has specialized in the field of Megaways and that has produced more such games than any other provider, including the godfather's of the celebrated mechanic themselves - Big Time Gaming. Firing up this Greek mythology themed offering, it instantly becomes entirely clear just how monumental of a creation it is. The cinematic music, the detailed backdrop that seems to fit nearly all of mount Olympus and, of course, the sweet, sweet visual presentation that Blueprint are known to master so well.

As the name suggests, ancient Greece is at the heart of Gods of Olympus, a 6-reel slot that can produce up to 15,625 ways to win when fully expanded. Highly volatile and playable from 0.10 to €/£10 per spin, the highlight of this thunderous offering is the Bonus Thunder Free Spins feature that comes packed with 4 epic bonus rounds - each with a unique way of creating winning combinations. This includes random wilds, increasing win multipliers, multiplier wilds, and roaming wilds that can grow in size.

Blueprint Gaming puts enormous effort into their Megaways titles and Gods of Olympus is certainly no exception to that rule. The production is massive, ambitious and has big budget written all over it. Just looking at it, there are plenty of dynamic elements and moving parts here that make Gods of Olympus come alive - burning flames, drifting fog and flowing waterfalls. With Mount Olympus in the backdrop and a dramatic soundtrack accompanying the action on the reels, symbols include lower value 9, 10, J, Q, K and A royals. More rewarding are the character symbols which are represented by Poseidon (god of the sea, storms, earthquakes and horses), a Spartan warrior, and Athena (goddess of wisdom and warfare). The most lucrative of all symbols is Zeus, the thunder god, giving you 25 times your stake for a six of a kind combination. The temple is the wild - it only appears on the extra reel above the main reel set and substitutes for all symbols bar the scatter and collect scatter symbols.

As in most Megaways offerings, the Cascading Reels mechanic is in play in Gods of Olympus - symbols that form part of a winning combination are removed and replaced with new ones, a cycle that repeats until no new wins appear on the reels. This allows you to win repeatedly from a single spin while also extending your play time. Central to the Megaways game engine are the randomly shifting reels. In this particular game, each reel can reveal up to 5 symbols in view, which means the slot is capable of producing up to 15,625 ways to win when fully expanded.

In the base game, the Zeus Power Spins may randomly come into play on any spin to award one of five modifiers. These are:

The highlight is the Bonus Thunder Free Spins feature which is activated when you land 3, 4, 5 or 6 scatters in view simultaneously - this will give you 10, 12, 15, or 20 free spins respectively. Once in, you will get to pick one of Zeus' four electrically charged stones to reveal one of four rounds - these are:

Gods of Olympus also comes with a Power Spins Bonus Bet feature that, for a cost of 50 times your stake, will activate the Zeus Power Spins. For those who don't want to sit around and wait for the free spins to drop organically, there is the Bonus Guarantee Bet feature. If you choose to go for it (it will cost you 100 times your stake), you will be granted direct access to the Bonus Thunder Free Spins feature.

If it wasn't obvious already from the first few lines of this review, we fell heads of over heels for Gods of Olympus, enjoying every spin from the first to the last. Truthfully speaking, there have been times when we've felt that Blueprint had stagnated a bit and become too comfortable in their creative process, and while it may not be of groundbreaking substance, Gods of Olympus feels like a step forward in Blueprint's perpetual process of perfecting their Megaways slots.

There's so much of everything here and the production is so massive that it's almost guaranteed to keep you occupied for days exploring all of its secrets. In short; it's beautiful to look at, offers great value for your money in terms of play time, and it's thoroughly fun to play. Medium to high variance, you can win up to 10,000 times your stake, although for that to happen you will need Zeus and all the other 11 Olympian gods on your side.

Jaw-dropping beauty and hefty features await in the hallowed realm of Olympus. 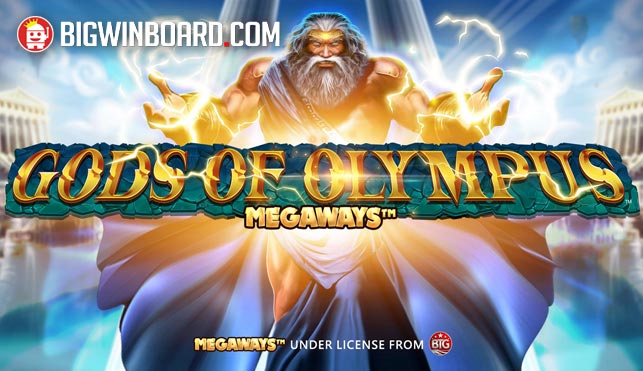