Nolimit City’s xNudge feature is rolled out again and modified with a clever new addition which spices up Harlequin Carnival’s festive atmosphere.

Harlequin Carnival is a 5-reel, 20-payline slot from the creative team at Nolimit City and yet another one to feature their xNudge Wilds and Nolimit Bonus Buy option. This time it's off to the masked world of aristocratic partying - not to be confused with the psychologist Harley Quinn who was driven mad by the Joker. Harlequins here refer to the diamond-patterned, masked characters used in pantomimes or to add mystery at swanky soirees. In Nolimit City’s game, the harlequin character brings the power of xNudge to the reels, which comes with a new twist not seen in previous slots that use the feature.

Harlequin Carnival doesn’t have the raw power of Barbarian Fury, or the rebel chaos of Punk Rocker, it's more delicate, more refined looking, as befits the theme. The 5x3 grid is located on the balcony of a palazzo, canal-side no doubt, beneath a canopy of flowers. In a final flourish, we get a sort of keyboard version of classical hits like Danza Húngara No. 5 warbling away in the background, adding a touch of class. Well, music is very personal, but it did feel like the weakest part of the game - though some players might love it. Either way, there is a mute button on hand if it is not to your taste. Either way, the first step before you dive into the action is setting up stakes which are available from 20 p/c up to £/€100 - manual, or up to 1,000 auto spins.

In keeping with recent form, Harlequin Carnival ships with a high volatility that Nolimit City rate at 10 out of 10. It does mean landing the bonus game might take some effort during a down patch, but the xNudge helps liven up the base game. Also, the game comes with a Nolimit Bonus buy option to skip the base game altogether. RTP can vary, depending on the provider. On the default setting it sits at a 96.14%, though it might be found at the not so equally enticing rate of 94.29%, so check the paytable before firing up.

Payouts occur by landing combos of three or more matching symbols, and twenty paylines lace the reels with which to do so. There are 9 regular symbols involved, divided into 4 low pays and 5 high. The low pays are ornately decorated gold playing cards displaying the ace of spades, hearts, diamonds, and clubs.

Values are pretty standard and improve with the high pays which are made up of five colourful revellers wearing different masks – a grape filled one, a beaked plague doctor-like mask, a red cat, a crescent moon, and a golden sun at the top. Premium payouts range from 5 times the stake for five grape masks up to 15 times the stake for five of the suns. Finally, the red and black harlequin is wild and comes in 1x3 size. It can substitute for any of the pay symbols and adds so much more due to its xNudge properties.

It’s really all about that enigmatic harlequin character that pops up in two guises with various effects. The first is as the xNudge Wild which is fully stacked and can land on any reel. If it partially lands, then it is always nudged to cover a full reel. Each position it is nudged increases its multiplier by +1. When there is more than one xNudge wild multiplier in view they are added together for better wins.

Landing the xNudge Wild symbol also triggers Harlequin Respins and the number of reels to its left is the number of respins awarded. Then, on each respin, the symbol moves one reel to the left until reaching the first reel where it's removed for the next spin. More xNudge Wilds can land on a respin as well which boosts opportunities.

The harlequin also appears on the scatter symbol which can land on respins or during regular base game spins. There are two ways of triggering the Harlequin Bonus game. One is when 3 scatters land on a regular spin. The second is when 3 are collected during Respins. In both cases, the bonus game initially begins with 8 free spins.

Keep in mind that xNudge Wilds that land still trigger respins, but this time when they walk their multiplier increases by +1 with each reel step. This includes the wild multiplier that starts the bonus game off, so the first free spin automatically comes with 4 respins and up to x7 multipliers.

Lastly, some players may have the option of skipping the base game and heading straight to the main event. This is possible in some countries with the Nolimit Bonus Buy feature which costs 70 times the stake for 3 bonus symbols on the next spin.

You have to hand it to Nolimit City, they have once again produced a highly entertaining slot. Harlequin Carnival is built around the power of xNudge Wilds and the new twist to the feature breathes life into it while providing some sweet moments on the reels. Multipliers always go down a treat and can quickly crank up a win when they land, more so when there is more than one in play. Harlequin Carnival might not have the visceral impact of some other xNudge slots perhaps, but holds its own in the gameplay stakes.

Nolimit City is certainly getting plenty of mileage out of their xNudge feature, but the odd twists added to each game keeps it fresh. The encouraging thing is that the modification it received with Harlequin Carnival is one of the most intriguing yet. Get more than one wild traveling left during the bonus game for instance, and the rewards can be substantial.

Harlequin Carnival might not be the highest paying slot around, but a potential of 5,861 times the stake should be enough to bankroll a masked shindig or two. It’s not always an easy ride, though. The math model can make you work for bonus symbols, so don’t expect those mischievous Harlequins to drop into the party all the time to do some wandering.

Still the chances are there and contribute to making Harlequin Carnival another highly enjoyable slot from the Nolimit City team who seem to be living up to their name right now. Is there only so much you can do with xNudge though? With what Nolimit City has conjured up so far, it feels like we are a long way off reaching that point just yet. 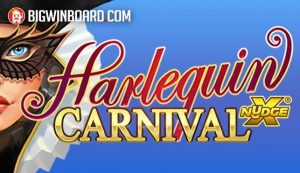