Jack Frost is a surprisingly well-known figure across the globe, associated with wintery weather in many cultures in one form or another. It’s this mischievous chap developer PG Soft has chosen to add character to their second use of the Infinity Reels mechanic on license from ReelPlay. In Jack Frost’s Winter, players are invited to a cosy snow-filled confine. It looks like it might be located in the Northern Hemisphere, somewhere a good sight chillier than their first Infinity Reels creation, Secrets of Cleopatra, was at least. 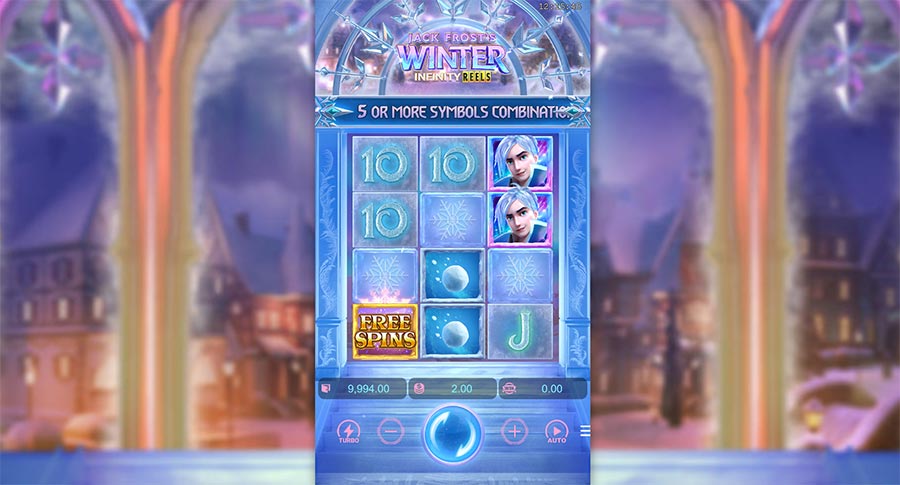 Like its predecessor, Jack Frost’s Winter doesn’t look so great on a desktop computer, where the grid is squeezed into a mobile sized space in the middle of the screen. Typical of PG Soft, Jack Frost’s Winter is aimed at mobile users, which is the segment of the market this provider has staked a claim in. There’s no mistaking Jack Frost is aimed at mobile users, meaning it doesn’t translate as well to larger devices. It’s just the tiny game area on a big screen makes it a less tempting prospect. It might not be so bad if the background was interesting, but it’s a blurred out image of a town centre. Admittedly, it is a charming ‘ye olde’ town centre, and when combined with the jingling Christmassy tune, does produce a certain level of warmth.

As well as technically being available to play on any device, Jack Frost’s Winter offers a wide range of stake options, starting at 20 p/c, rising to £/€200 per spin at the higher end. PG Soft has stuck with high volatility, just as with the previous one, while RTP drops slightly, though still remains at a highly respectable 96.7%. No hit rate was available this time around, but there’s no reason to expect it won’t be similar to Secrets of Cleopatra’s roughly one win in five spins.

The action here kicks off on a 3x4 set up. How Infinity Reels works is that at least 5 matching symbols left to right create a winner. If the rightmost reel contains at least one of the winning symbols, another reel is added. New reels are continually added as long as they are able to improve the current win or a scatter lands. While this is going on, a win multiplier is generated to boost the payout. At the start of every main game spin, the multiplier is x1 and increases by +1 whenever a new reel is added. When a win is paid, the multiplier resets back to x1 in the base game.

As to symbols, they might have benefited from a broader colour palette as they come across as a bit drab and lifeless. On the low side we find 9-A royals designed in the cool tones of winter, followed by a snowball, a snowflake, an owl, and Jack Frost as the premiums. Landing a one-off five of a kind premium win is worth 1.5 to 2.5 times your stake. Low, yet adding reels along side multipliers can have a significant effect on those values. 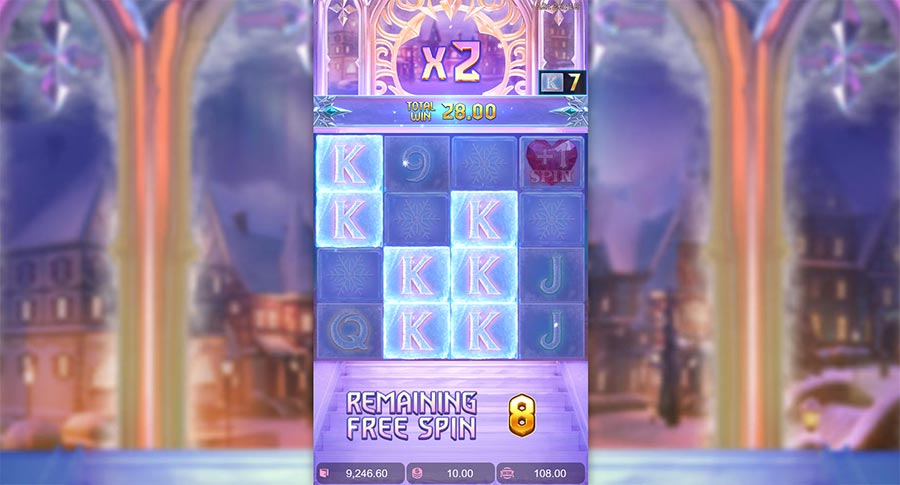 Jack Frost’s Winter is not the most feature-rich Infinity Reels game on the market, offering expanding wild symbols, free spins and a progressive multiplier which was covered above. Wild symbols land in 1x1 size, and when they do, they expand to cover the full reel. They have no value of their own but replace any other pay symbol to help complete wins.

The final main game symbol in Jack Frost’s Winter is the scatter where landing 3 or more in a win sequence awards 10 free spins. Each extra scatter in view adds +2 free spins. At the start of free spins, the win multiplier is x1, no matter what might have accrued during the triggering main game spin. However, the multiplier does not reset between free spins which is a bonus. Two new symbols also appear now – the star and the heart. Hearts award 1+ free spin each, while Stars increase the multiplier by +1. There are no set limits on either.

Jack Frost’s Winter is one of those games which is relatively easy to blink and miss. What we mean is it lacks that certain something to make it stand out and inspire a second jam. Its middling nature means there isn’t anything glaringly off-putting, nor anything super compelling either. It does its thing well enough; features work alright when they’re firing as they do in most Infinity Reels games, but there’s nothing you won’t have seen before either. Like catching a falling snowflake on your tongue, Jack Frost’s Winter is pleasant for a moment, yet its lack of flavour doesn’t invite a repeat performance.

Then again, Infinity Reels enthusiast may well enjoy the change of scenery, and those expanding wilds are pretty neat, though not as exciting as what Book of Ultimate Infinity did with its expansion dynamic. On a positive note, Jack Frost’s conjures up a bunch of impressive stats, including a higher than average RTP. This brings us to the interesting topic of potential, where the stated max win is vast. Like Secrets of Cleopatra, PG Soft claim wins of up to 100,000x the bet are possible in Jack Frost’s Winter when reels are pushed to their limit. As before, there are hesitations over just how possible this is, and if so, what sort of win cap would most likely need to be involved.

To sum up, there is no major reservation over what Jack Frost’s Winter does as such. For an Infinity Reels game on your mobile, it’s as good as many others. A nagging question is whether Jack Frost does enough to justify choosing it over the growing number of Infinity Reels games that work harder to differentiate themselves?

Those after an innovative Infinity Reels slot will find that somewhat lacking in Jack Frost’s Winter, despite being a decent enough example of this type of game. 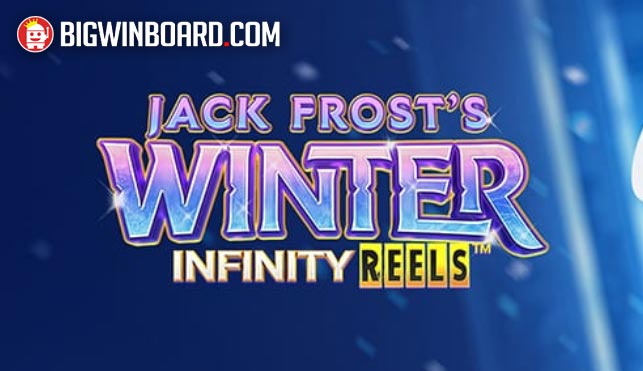