It’s been an unusually hectic week for us here at Bigwinboard. Then again, being managed by a small group of independent slots enthusiasts, it sort of always is. The busy schedule should be taken as a good sign though. Bigwinboard is growing rapidly and is now bigger than it has ever been. Although the site earned its strong credibility as a source for unbiased slots reviews early on, it’s not also being recognized as the leading slots reviewing site by the industry too – one of the more well-known game studio CEO’s even dubbing us “the IMDB of slots”.

This also means that we’re being approach by numerous game providers to do different promos and giveaways, which is great news for you readers and something we know would be highly appreciated. For example, the awesome people at Nolimit City has offered to do a really nice giveaway for you guys with really cool prizes. Sadly, we haven’t had time to organise it just yet, but are working hard to catch up.

Alright, so now that you know a bit more about what’s going on at the Bigwinboard office, it’s now time for another one of our roundups in which we list the most interesting new online slot releases of the week. Let’s-a-go. 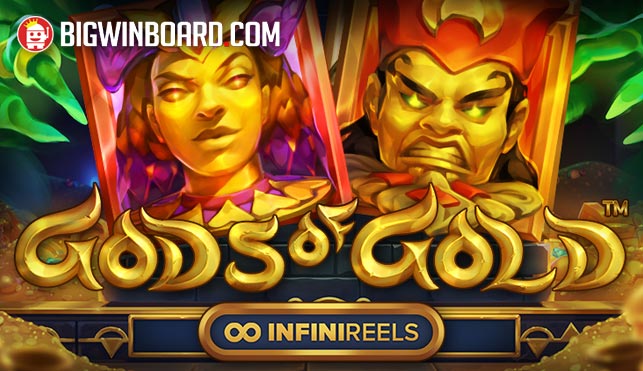 Swedish developer NetEnt’s new slot Gods of Gold InfiniReels turned out to be one of the more controversial releases in a while. Or, so it seemed at least for us on the outside until NetEnt Director of Games, Bryan Upton, explained it all to us in an exclusive interview published on May 14. What first appeared to be an infringement on ReelPlay’s Infinity Reels mechanic, turned out to be an almost unlikely coincidence where two different studios had been working simultaneously on very similar mechanics. That is the official version at least.

Whatever the case, Gods of Gold InfiniReels has been off to a really strong start and punters can’t seem to get enough of it. No wonder. With excellent visuals, reels that can expand without limit, and win potential of up to 25,000x, it has plenty going for it.

Speaking of controversy, Microgaming partner All41Studios has been on a plagiarizing spree so incredibly shameless it probably even makes notorious cloning champs like Play’n GO cringe. Now, although they seem to have gotten away with it a few times, they finally made a rookie mistake. You don’t mess with the Zohan…sorry, we mean NetEnt. And in particular not with their sweetheart Starburst. As it turns out, All41Studios’ Space Enigma slot which was due for release in February, never showed up. Go figure.

Big Time Gaming must have been an easier target, for All41Studios’ latest release is nothing short of a Danger! High Voltage knockoff. It’s painful to admit, but being a clone of one of the best online slots ever made, Electric Avenue is pretty decent. It’s got a good vibe, an outstanding soundtrack and, of course, great gameplay (insert rolling eyes smiley). Once players have satisfied their curiosity, however, they’re bound to go back to the original which is far more superior.

The first Expendables Megaways slot wasn’t all that exciting. Stakelogic played it a bit too safe with that one, making it one of countless other Bonanza type clones. The second one flew a bit under the radar and was released exclusively at Rizk casino last week. Titled The Expendables New Mission Megaways, Stakelogic has learned from its mistake and have made sure to packed more explosions, features, and all the fun factor a branded slot should have.

Ok, so it’s not exactly the best Megaways slot ever released, but if you’re into this particular genre, it cannot be ignored. As expected, both volatility and potential is high, the pace of the game is too, and the Megaways game engine has been put to good use, providing that extra layer to make it all the sweeter.

Play The Expendables 2 at Rizk

Another slot that rolled out as an exclusive release is Yggdrasil Gaming‘s Arthur’s Fortune. If you don’t yet have an account at Mr Green, this can be a good time to create one. It’s not that it’s super innovative or features cutting edge graphics. No, Arthur’s Fortune is classic Yggdrasil gaming with excellent potential and just fun, no nonsense gameplay.

Arthur’s Fortune is one of those solidly built slots, simple, yet one in which every aspect has been expertly put together. This being Yggdrasil Gaming, Arthur’s Fortune is pleasant to the senses, but its elegance goes deeper than that. Each aspect complements the other and works together to climax in an epic bonus game when firing on all cylinders.