There really isn't all that much to Rhino Rampage, but solid stats and ok presentation still make it worth a shot. 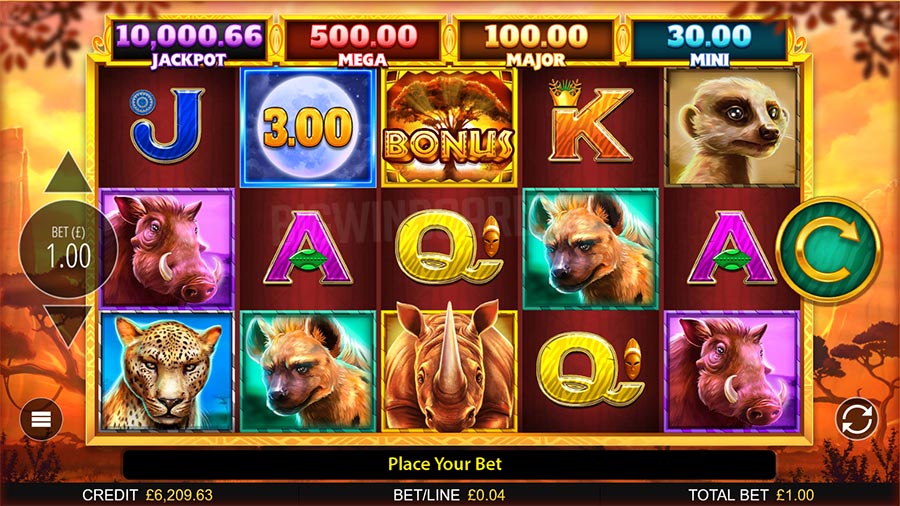 Gosh, rhinos get a bit of a bad rap in the iGaming world, don’t they? If slots are anything to go by, then the African grasslands are teeming with wildlife that’s out to get you. None more so than the lumbering grey rhino. Judging by their portrayal in slots, the prehistoric-looking beasts are constantly on tilt, running around the countryside tearing the place up. Or rampaging, as they do in Blueprint Gaming’s slot Rhino Rampage.

Couldn’t once we have Rhino Relaxation or Resting Rhino? Just thinking out loud here, because when you see them at the zoo, they’re actually pretty docile, spending most of the time staring at passers-by in half-dazed bewilderment. They are pretty big though, and a rampaging rhino must be quite a sight.

The slot version isn’t quite as impressive. What greets players when the game loads is fine, but it is hard to stifle a feeling you’ve seen it all before several times. Behind the 5-reel, 3-row grid, Africa blazes in yellowy red tones silhouetting its impressive landscape. A Circle of Life soundtrack beats away in the background and the overall impression is pleasant, if a little clichéd. If you like the Africa slot scene, you’ll love it.

Set bets by clicking the arrows on the menu bar - as low as 0.25 c/p or as high as £/€125 for the rampaging to begin. Rhino Rampaging is a fairly straight forward slot, done in a classic styling with simple rules that match the laid back atmosphere. The math model isn’t quite so relaxed though, running at a medium to high setting, accompanied by a rather high RTP as well. The total figure is 96.28% which is broken down into 96.28% plus 0.25% for the jackpot and a reserve of 0.25%. Overall, the mechanics should satisfy a wide range of player types.

Given the theme, you’d expect to find a bunch of animals on the paytable and there are no disappointments. It starts with a collection of J-A royals, nicely decorated in small in-theme, tribal flourishes, while premiums are made up of meerkats, warthogs, hyenas, and leopards. Players hit a winner when three or more matching symbols line up consecutively from the first reel onwards – on any of the 25 paylines.

Assisting in this task is the rhino wild. The wild can substitute for any regular symbol, and may also appear stacked covering a full reel. As to rewards, five of a kind premiums range in value from 6x to 16 times the stake, but it’s the rhino you want. As well as being wild, five of the horned beasts on a payline are worth 40 times the stake.

To avoid the base game getting overly repetitive several features pop up now and then to break up the flow. One is the Lightning Spins feature which has two ways of being triggered. One is through the base game when 6 or more moon symbols are in view; the second is by landing a colossal moon symbol during free spins.

Whichever way the feature is activated, players get 3 Lightning Spins with the only symbol on the reels being moon symbols. Should a moon symbol land, then the number of spins is reset back to 3. Moon symbols reveal either a cash prize or one of three fixed jackpots - Mini, Major, or Mega jackpot worth 30x, 100x, or 500x respectively.

The goal is to collect as many moon symbols as possible to rack up winnings. The feature continues to run until the Lightning Spins run to zero and the total amount on the reels paid out. Or better, should the screen become filled with moon symbols, then players win the progressive jackpot.

Rhino Rampage is also padded out with a round of Free Spins triggered by the 3 scatter symbols appearing on reel 1, 3, and 5 simultaneously. Starting with 5 spins, here you'll benefit from the 3 central reels merging to create colossal 3x3 symbols to help you form big wins. Moreover, should you land a colossal scatter symbol, another 3 spins is added to your total.

With a ton of rhino slots already available, what does Rhino Rampage bring to the party? Well, not a whole lot that is overly new. The game has a strong Wolf Gold feel to it due to things like colossal symbols, moon symbols, jackpots, and so on - Wolf Gold on the Serengeti if you will. It does mean that if you liked Pragmatic Play’s wolf filled slot, then the chances are good you’ll also go for Rhino Rampage. Even the looks are quite similar, albeit with a different set of animals filling out the reels.

Putting comparisons aside, on its own Rhino Rampage is a dependable rhino themed game. The features work quite well and present numerous ways of picking up wins. The jackpot is the one you want naturally, but full-screen wins of up to 1,000 times the stake are possible, provided it is the wild stacking it. Max win, meanwhile, has been capped at 25,000 times your stake, which is massive, but unlikely to be cracked using what Rhino Rampage has to play with.

There are a few plus points you can take away from Rhino Rampage. One is the pretty generous RTP rating for a slot with a jackpot attached. We might not be talking Mega Moolah levels of riches here, but it’s a jackpot all the same. Rhino Rampage probably won’t get too many hearts racing, yet it's a solid effort that offers decent visuals, straightforward gameplay, and a mathematical model on the A+ side. 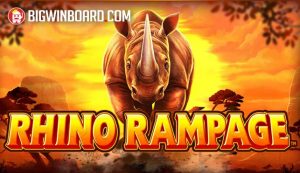