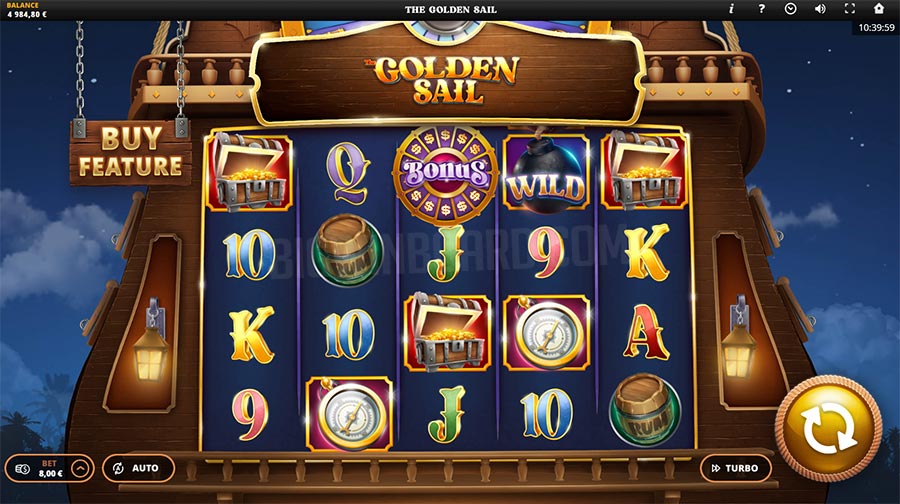 In their own words, Bulgarian based Silverback Gaming is an ‘up and coming studio’ that has teamed with Relax Gaming in order to maximise reach using the Silver Bullet platform. The first one to cross our path is The Golden Sail, a pirating themed escapade bursting with extras on the high seas. Pirating is a common theme, but instead of draping themselves in skull n’ crossbones, the theme treatment is relatively light. In this particular game, Silverback has focused on bolting on several classic bonus games, offering significant potential. Sometimes when trying to make everyone happy you end up pleasing no one, let’s see if The Golden Sail avoids slipping into this paradox.

The first impressions of The Golden Sail were of a clean, sanitised Disney version of pirating rather than a darkly, gritty one. Action takes place on a 5-reel, 4-row game area, using 40 fixed paylines. The grid sits on the back of a ship, heading towards what is presumably a deserted tropical island sprouting palm trees to bury some ill-gotten treasure. Swishing sea sounds and swashbuckling music provide drama, but the scene as a whole isn’t overly exciting. There’s nothing wrong; it’s just the symbols and reels are more reminiscent of a land-based casino than a dangerous Caribbean destination.

Silverback has made The Golden Sail available for players on all devices, allowing just six stake options from 40 p/c to £/€40 per spin. Highly volatile, the RTP comes in two forms, depending on whether the feature buy is available. The default is 95%, rising to 95.25% when the buy feature is engaged. Symbols, meanwhile, are ironically symbolic of the game as a whole in that they do the job without making exciting use of the theme. On the low side are 9-A royals, while the highs are comprised of barrels, maps, compasses, and treasure chests. Five of a kind premium wins are worth payouts ranging from 5 to 10 times your stake. At 12.5x the bet for five, the wild is the most valuable tile on the board, while also substituting regular pays to complete combinations.

The Golden Sail is a slot that offers a little bit of everything when it’s time to award features. The first step is to land 3 wheel symbols on reels 1, 3 and 5 to access the Big Wheel, sitting patiently above the reels. Once activated, players click the red button to get the wheel spinning, and wherever it stops is their reward. This could be a 50x the bet instant prize; a pick-me game, free spins, or the trail bonus.

The pick-me bonus is a simple matter of choosing one of 3 chests, revealing a prize of up to 5,000x your stake. The minimum you can win in this feature is 100x your bet.

Finally, The Golden Sail busts out a treasure map for the trail bonus feature. Here, 6 coins line the bottom of the screen which reveals numbers 1-6 when players click on them. This number translates to movements along the map. After the number is displayed, if ‘+Again‘ pops up, players get another pick. If not, the feature ends and whatever multiplier currently reached is awarded – this could be as high as 10,000x the bet.

Where possible, The Golden Sail may also come with a Bonus Buy feature. For a cost of 85 times the bet, 3 scatters are guaranteed to land on the next spin, sending you directly to the wheel. As mentioned previously, this also raises RTP with 0.25%.

For the most part, The Golden Sail avoids spreading itself too thin, and each of the three bonus rounds is capable of tense, high win gaming. It’s not as refined a package as say, Blueprint Gaming‘s feature fests can be, The Goonies being an apt comparison, but The Golden Sail’s big potential helps make up for the shortcoming.

All three key features (free spins, pick me, and trail) are completely capable of being as frustrating as they are entertaining, in their own unique ways. Despite a progressive multiplier incrementing on each free spin, it’s possible to end up watching a large multiplier go to waste. Then again, you can get lucky, and pile on coins. It’s the same with the trail multiplier where the main frustration is not getting the +Again message. The good thing about the trail feature is you always get some movement before the game cuts out. Likewise, the pick me game’s positive is you always win at least 100x. As in a Blueprint extravaganza, there is something compelling about the bonus games that will inspire completionists to see them all at least once.

Players who value variety get a real selection of features in The Golden Sail. None are especially new, in fact, all crop up regularly. Where they do differ is in the size of their rewards. You don’t often run across trail bonuses worth as much as 10,000x, or pick me games capable of 5,000x payouts. Without the big numbers, The Golden Sail wouldn’t be half as enticing because the rest of the game is pretty mediocre. Graphics are okay, though The Golden Sail is nowhere near as atmospheric as say, Play’n GO‘s Jolly Roger 2, or NetEnt‘s Rage of the Seas. Instead, it feels like an almost physical slot experience, all big symbols and clickable features rather than an exercise in world-building.

The Golden Sail is a decent effort that serves up just about everything except x-factor.