When you stop and reflect on how out-there developer Nolimit City is, it's hard not to stifle a giggle. One minute you're skipping carefree through the jaunty Irish hills, or a jungle-themed wonderland, or Ancient Egypt; the next moment, Nolimit drops a slab of a game that makes you wince. True Grit Redemption is just this sort of slot, serving up a stack of features, in about a grim a setting as it gets - and this is factoring in a previous game based on a mass shootout called El Paso Gunfight, which features an infamous urinating in a cemetery image.

Hopefully, that intro has set the tone of what to expect when True Grit Redemption muscles its way on screen. Our first thoughts were who's been beating up a certain environmental activist and were Nolimit City watching Gangs of New York when they designed the game? There are elements of both here amidst a cold dismal outdoor setting. If True Grit Redemption was a film, it might also be something along the lines of No Country for Old Men. In this world, heroes can be brought down, baddies can win, and there ain't no such thing as women or children first. Nolimit City are undisputed masters of making Western slots, and True Grit Redemption reveals a side of the genre players have probably never seen before. They may have heard it, though, because, like Deadwood, Nolimit City's sound wizard David has once again outdone himself with the atmospheric soundtrack. 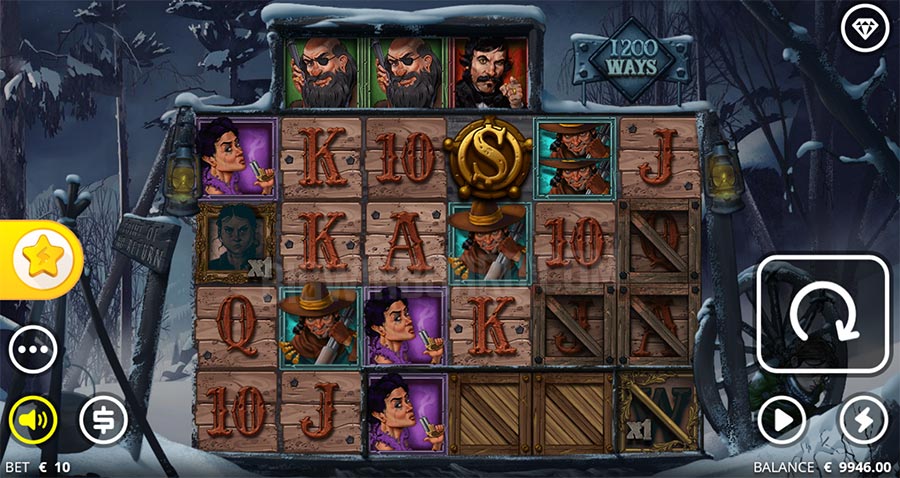 Before scoring some redemption of your own, pick a bet from 20 p/c to £/€100 per spin and saddle up. Volatility is rated 10 out of 10, or 'Extreme' in non-numerical terms, while RTP tops out at 96.11%, though buying free spins affects the value. The 6-reel grid might look like Megaways at first but not quite. How it works is the top reel holds only character symbols or wilds, the main 6 reels hold regular pays, wilds, scatters, or Grit Girl symbols, while the locked positions on the bottom reel hold character or special symbols. The locked areas on the main reels open when scatter symbols hit, and the bottom right position always holds a sticky wild multiplier which becomes active during Dead Spins as you will see.

Paying from the left side of the grid, winning combinations are formed of matching symbols landing in adjacent reels regardless of position. This creates 240 ways by default, blowing up when positions are unlocked and symbols split. Winning combinations trigger a cascade feature, which removes them and fills empty spaces with new symbols. On the lower side of the paytable, we get 10-A card icons worth 0.2 to 0.75x for six of a kind rising to 0.85 to 1.75x for the next five-character symbols. Grit Girl is the one you want as she lands on reels 1-4, paying x25 for three or x500 for four. Grit Girl pays when she appears on 3+ reels, and her wins are multiplied by the bottom right sticky multiplier whether it is unlocked or not.

We wouldn't be surprised if you are scratching your head in confusion already, so let's dump a load more features on to really get your eyeballs spinning. First up are a bunch of x prefaced features.

If symbols on the top reel match any of the symbols beneath it on the same reel, they both transform into wilds.

A stacked wild symbol appearing on the bottom reel which always nudges to be fully in view. Each position it nudges increases its multiplier by +1. If the xNudge is not used on a win, it folds back down and nudges on the next cascade with an increased multiplier. More than one active wild multiplier adds their values.

The Reel Split symbol appears only on the bottom reel and doubles all symbols above it on the main reel. Then, it vanishes, letting symbols on the bottom reel to fill the gap. Reels can split 2 times max, and the Grit Girl does not split but doubles its payout multiplier.

This symbol appears on the bottom reel only. When it hits, it transforms all low pays into the same low pay symbol or all characters into the same character symbols. It does not affect tiles on the top reel, though.

Landing 1, 2, 3, or 4 scatter symbols unlocks 4, 7, 9, or 10 of the locked positions on the main reels. In addition, having 3 scatters in view triggers 8 Torture Spins, plus 1 spin for each split part of a scatter. Unlocked positions remain that way for the duration of the feature, and landing a 4th scatter upgrades the round to Dead Spins, adding +2 spins and +1 again for each split part of a scatter.

Landing 4 scatters get you 10 Dead Spins, plus 1 scatter per split part of a scatter. The difference now is the sticky wild multiplier in the bottom right corner is unlocked. The multiplier increases by +1 for each cascade.

In total, three options are available from the Nolimit Bonus menu. Torture spins cost 69x the bet, or Dead Spins 669x the bet. Or you can pay 189x the bet, which has an 80% chance of awarding Torture Spins and 20% of Dead Spins.

Hopefully, everything is somewhat clear now, but perhaps not, since the gameplay is rather involved as it often is from Nolimit City. It's as if the studio has rammed just about everything into this one, from Fire in the Hole's locked positions to East Coast vs West Coast's Infectious xWays and beyond. Sometimes it feels like someone's sitting back spraying features willy nilly onto the board like buckshot. As such, one approach is to skim read the rules without expecting to totally understand them, let them ferment in your mind, demo the game for a while, come back to the rules, repeat the process, and like Mental, remain utterly confused.

We're playing around of course, sort of, not really. True Grit might not be a paper on quantum entanglement theory, but it is more complex than most slots tend to be. But hey, part of the fun of discovering a new Nolimit City slot is watching 50 moving parts do their inexplicable thing, then firing off a substantial payout and not really knowing why.

Clearly, there are a lot of features, and you'll need them to play ball to get anywhere because regular symbol values are low. That, or land a juicy Grit Girl win. The way she is multiplied by the sticky wild multiplier in the bottom corner can be eye-opening. After a few cascades have jacked the multiplier, maybe a Reel Split's been tossed in, Grit Girl wins are like revealing the top prize on a scratch card. As well as rules, numbers in a Nolimit slot sometimes have deeper meanings as well. True Grit Redemption's max payout of 20,220x could well be one of these puzzlers. Is it some obscure reference to the year 2022 in some ancient calendar? Comments below if you know the answer? Either way, the 1 in 6 million chance of hitting the win cap is quite an encouraging number relatively speaking.

Players who like to bang away on the play button and mentally visualise where they would like symbols to land to create optimal results probably won't be super comfortable with True Grit Redemption. Nor will anyone squeamish about the grimdark storyline. The lowered potential and reduced odds might open the door to a wider audience a crack, but True Grit Redemption is no fruit slot and remains the preserve of players who enjoy a ballsy, uncompromising challenge overflowing with features that take a few spins days to figure out.

Excellent presentation and a steady flow of features make this journey a massively enjoyable one.