✅ Play Drill That Gold on

Hopefully, the batteries in your helmet lamps are charged, folks, because we're heading underground to do a spot of ore extraction-based gambling courtesy of software provider Pragmatic Play. If that intro was a tad convoluted, what we mean to say is here is Drill That Gold, a game for gold mining slot fans to sink their pickaxes into. And there must be a lot of fans out there because we can generally count on new mining-centric games to hit shelves on a regular basis. Wading into such a popular genre isn't so bad, provided the slot in question offers something, anything, to raise it above the others. Does Drill That Gold?

Not so much at first, since the view that greets players is a pretty standard one. We've got a miner on the right, nuggets of rich stuff behind him, and a 5x3 game panel framed with wooden planks sitting in the centre of it all. Then again, there are more mechanically-minded objects in view than usual, such as an intriguing contraption on top of the reels, so let's not be too hasty in our criticism. For now, let's just say Drill That Gold balances on a knife-edge between being interesting and old hat.

In that case, it'll be features which will be the deciding factor. Before we get to them, though, a quick word on the nuts, bolts, and pistons running the game. First off, the volatility of Drill That Gold has been set to high, while the default RTP comes in at two levels. When betting regular, stakes range from 20 p/c to £/€125 per spin, with an RTP of 96.49%. Interestingly, this value is a little higher than when the Ante Bet Option is activated, which increases the stake by 25%, yet drops RTP to 96.45%.

Alongside the drilling action, ten pay symbols are provided, as are 20 fixed paylines to create winning combinations. On the lower side of things are 10-Ace card rank tiles paying 0.8 to 2x the bet for 5 on a payline, increasing to 3.2 to 10x the bet for a line of five. Rounding off the regular symbols is a wild, hitting on all reels and substituting any other symbol except the bonus. 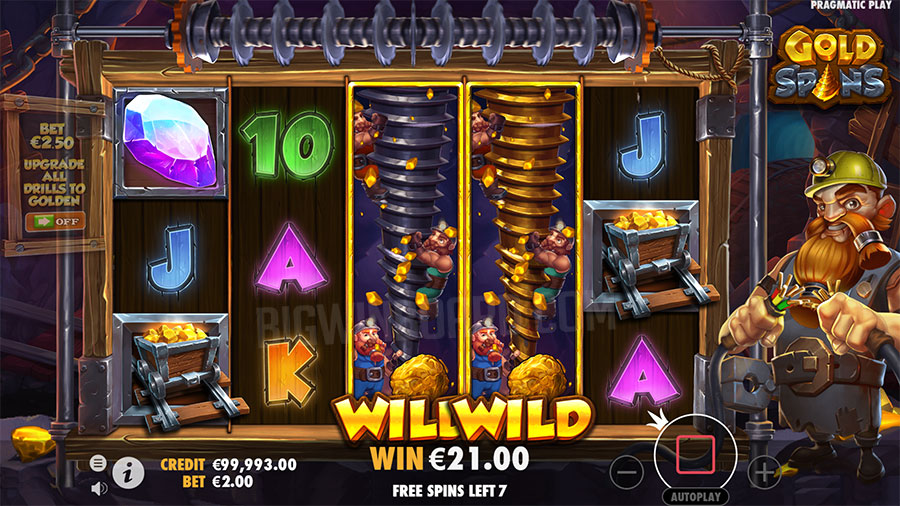 Drills feature prominently amongst Drill That Gold's extras where players can encounter a Drill Feature, Spin Modifiers, Gold Spins, and an Ante Bet.

When a stack of miners hit, it transforms into a silver drilling symbol. Next, this drilling symbol expands in an upwards direction and turns wild, which can then reveal a cash prize of up to 100x the bet.

On any non-winning spin, there is a chance a modifier occurs to turn the spin into a win worth at least 10x the bet. Or, it may produce enough bonus symbols instead to trigger the Gold Spins bonus round.

Previously touched on, when the Ante Bet feature is active, the drill symbol in the base game will always be a golden one.

Drill That Gold does hit a certain level of paydirt, pushing it beyond the level of pyrite. There is indeed a fair amount of drilling going on, which you don't always see in a slot. One possible competitor that came to mind was Relax Gaming's TNT Tumble, which has a stronger drilling presence and a greater sense of digging beneath the ground. TNT Tumble is the more innovative game too, but trying radical new things is something we're more likely to expect from Relax Gaming than Pragmatic Play. For while there is plenty of drilling action going on in Drill That Gold, drills are basically just a graphical cover for expanding wilds, though any cash prizes they may bestow are a plus.

We'd have to say Drill That Gold is a fully functioning mining slot, yet one which doesn't reinvent the genre like say, Fire in the Hole xBomb did. It looks pretty good, in the way Pragmatic Play slots typically are, and its stats are respectable, provided you've got your hands on the highest RTP version. From a technical standpoint, then, the game is hard to knock, and the whole drilling, expanding wild concept makes logical sense. In short, players after a mining themed slot shouldn't be disappointed by what they find in Drill That Gold. Potential isn't bad, reaching as high as 5,000x the bet if you can tap the right rock. This figure is a hard win cap, by the way, ending bonus rounds in their tracks before they turn into too much of a gold rush.

Despite the slick production, Drill That Gold is unlikely to make overly deep impressions. It does what it does in a perfectly competent fashion, possesses a couple of interesting ideas, but feels closer to experienced, comfortable design than a valiant exploration of subterranean places beneath the earth.

Despite the slick production, Drill That Gold is unlikely to make overly deep impressions.